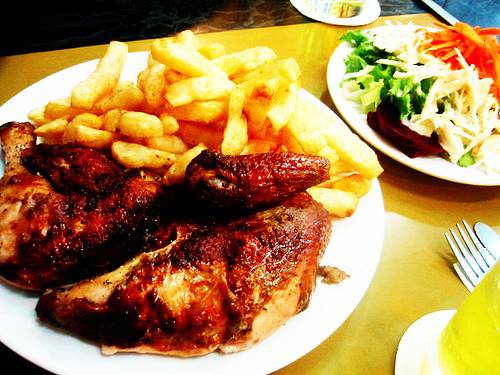 According to statistics, when choosing a preferred food, 9 out of 10 Peruvians prefer “pollo a la brasa” and at least twice a month it is eaten by entire families. It is widely known in Lima and, thanks to the actions of Peruvians, franchises have been opened in Argentina, Chile, Spain and the United States, receiving good reviews from foreign diners.

What is Pollo a la Brasa?

According to the National Culture Institute, influenced by popular opinion, Pollo a la Brasa is one of our flagship dishes, icon of Peruvian cuisine. Accompanied by French fries made from yellow potatoes, different sauces like mayonnaise, Huancayo-style cream, ocopa, yellow peppers, etc.; and with a delicious, cold Inca Kola, it is a dish that you will never forget.

The secret of its flavor is found in the way it is prepared. The meat of the hen is chosen because it is more tender and juicy and will better absorb the marinating of the condiments, especially herbs and pepper. Afterwards comes the preparation process which explains the dish’s tradition.

Where does it come from?

In 1950, the employee of entrepreneur Roger Schuler was preparing tender chickens on a metal beam over coals.    In order to make her job easier, she contacted a friend who is an expert in metals and created the machine that made this dish famous:  an appliance capable of rotating eight iron beams on their axis over coals, allowed the mass production of this dish.

With these, she opened the first location for pollos a la brasa: “La Granja Azul”, which became a favorite place for the Lima aristocracy, where they would give themselves the luxury of eating with their hands due to its excellent flavor.

Why French fries instead of rice?

In of the curiosities of Peruvian cuisine is that all dishes should be accompanied by rice.  However, the pollo a la brasa is served with French fries.  This is due to the fact that Schuler did not like rice, which is why his employee always replaced it with this garnishment.  At the time of opening  “La Granja Azul”, the employees did not know if the dish was for him, so they put French fried on all the dishes.