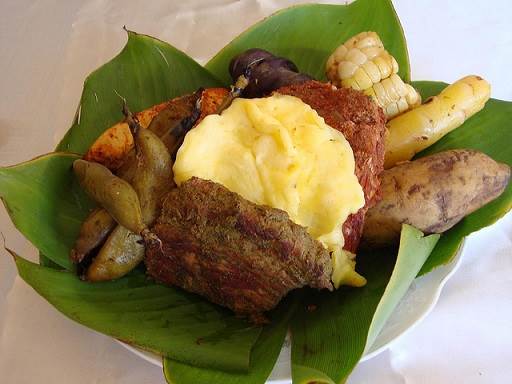 The Pachamanca, that in Spanish means “Pot of earth”, was one of the most abundant and most diffused dishes of the Inca Empire that have arrived at our times almost with the same form as was produced in its times. Its preparation has a very established symbolism in the Andean culture, since it represents the symbiosis of the cosmology of the Inca period, in which great importance was given to Mother Earth: which feeds us.

Its greater boom is during the months of February and March, in which most of the Andean religious festivals are carried out in almost all the towns.

How is the Pachamanca prepared?

Its form of preparation is very laborious.  In first place, you have to begin by heating the stones on the fire, so that they can cook the food.  Then a ritual is done in which thanks is given to the land for the food that will provide us in a few hours in a pit of 2 meters of depth that we have previously dug. In this pit, the hot stones are placed at the bottom and they are covered with the meats already prepared.  Then leaves of corn are placed so that these cook the vegetables that accompany it: beans, potatoes, carrots, etc.

Where does Pachamanca come from?

Though the meats that are utilized currently are of European origin – beef, chicken and pig, in its origins the llama meat was preferred.  In this meal, the food is not the important one, but is a by-product of the respect that has been given to mother earth.  That is to say: the history of the dish is not found in the taste of the it, but in the way it was prepared.

Due to its complicated process, many people are required to do it.  The men of the town gather to do the ritual and to dig the pit while the women do the prior preparations of food in their houses, that will then be cooked in the land.

While the dish is being prepared under the land, the entire town plunges itself in a religious festival and adorns the spot of the Pachamanca with a cross over it, which indicates where is found and what it represents.  The corollary of all the ritual is the tasting of the dish.

Where is te best Pachamanca prepared in Perú?

In Lima diverse localities outside of the city exist that prepare this meal, but if what  is desired is to live the experience and to participate in it, it is required to go to the Andean towns located in the slopes of the valleys of Cuzco and Apurímac, where the tradition is maintained like such during the months of February and March.