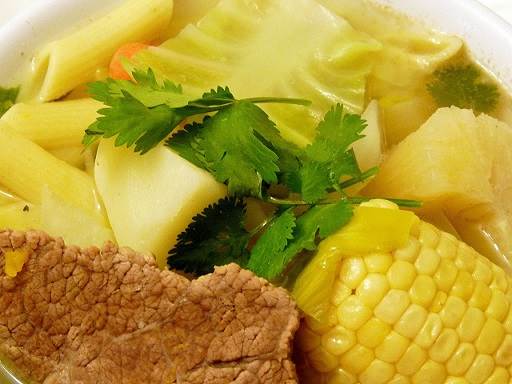 In the bygone days of Lima, where housewives upheld ancient traditions in the preparation of meals, it was common to taste the famed Peruvian Sancochado, a dish that consists of various meats, boiled corn on the cob, different types of potatoes, yucca and yams, seasoned with seasonal fruits and the perennial hot pepper.

Its origin comes from the fusion of Spanish and Incan techniques in food preparation.  According to the Iberian chroniclers, there existed a Pre-Colombian dish called  T’impú, which consisted of thick llama meat seasoned with salt, accompanied with potatoes, yuccas and corn and with herbs such as muña or mint. Spanish women quickly learned to prepare this dish due to the great similarity that it has to the Spanish Cocido, which consists of beef, ham, sausage, turnip and cabbage. And this is how the Peruvian Sancochado was born.

During the last decades of the Viceroyalty, the dish became extremely aromatic since spearmint, cilantro and parsley, among others, were added.  Currently, the Sancochado is having a well-deserved resurgence at Peruvian tables. This is due to the fact that it is prepared during special occasions of the year, when the crop has been abundant and the traditional families celebrate by placing the best meats in the roasting spit, trying to bring back to Lima that incomparable aroma that filled the plazas at lunch time.