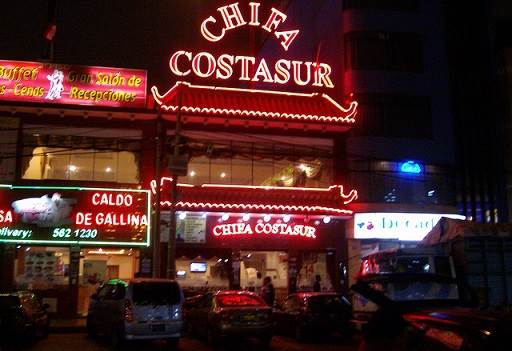 Chinese food in Peru is very different to international Chinese food.  It is popularly known as Chifa (name by which the restaurants that offer this food are also known by), voice that comes as an interpretation of the phrase the chinese traditionally use to say when food is ready: Chi and Fan (“eat” and “rice” respectively).  The Chifa is a food with such an influence among the peruvian people that it is considered as part of the traditional peruvian cousine.

The history of Chifa date back to mid XIX century, when numerous families from China mainly from the locality of Canton) migrate to Peru to work in the coastal country houses.  These people were known in Peru as “culies” and were subject to working environment that mirrored slavery, even with limited service.  These, done with their contracts, moved to urban zones and initiated food  and commerce related businesses (also the traditional figure of the chinese grocery was born).  Years later, the seasoning of the cantonese food was confused with the raw materials and peruvian techniques giving origin to this delicious mix known these days as Chifa.

The years went by and at the beginning of the XX century the first chifas “appropriately named” started to emerge.  The first one of them was inaugurated in the year 1921 and it was named Kuon Ton (Cantonesse) and based on an article “Arte Culinaria Del Celetes Imperio: Gastronomía China Conquista Los Paladares Criollos”, it was precisely in this restaurant that one of the most commonly used chifa terms was created: “Tay pá”, that refers to a dish very diversed and well served named same as it is prepared. The Chifa is clearly a gastronomic patrimony of Peru.  The chinese kitchen that is made in our country is probably the best in America and only in Lima  is so popular that we calculate around 5000 chifas.  Another city known for its chifas is Huacho, located to the north of the capital.