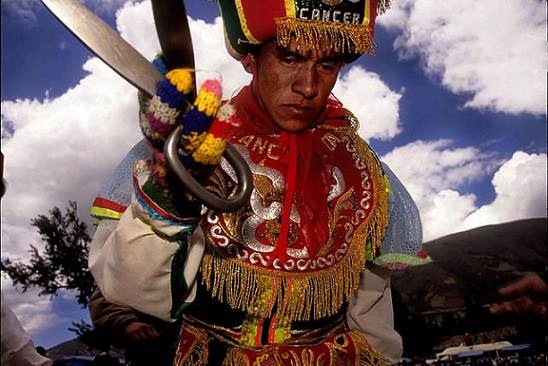 If only one distinction should be named to separate Peru from the rest when comparing all the top tourist destinations of the world, that one distinction should be its many traditions, each and every one loyally protected by the inhabitants of every village, and each inhabitant waiting and wanting to share the enchanting moments and riches of the festivals with national travelers and tourists alike and especially with those that are looking to appreciate the beauty of showmanship in these events.

Every year, towards the end of the year in December, the whole Huancavelica region located in the Central Sierras of Peru, prepares itself and its people for the grand festivities that commence around this time – the celebrations of Atipanacuy or Contrapunteo (Counterpoint), in which the crème de la crème of “scissor dancing” (Las Danzas de Tijeras), the most prominent and distinguished of these dancers, compete to be the best at the complicated intricate dances, which are definitely a real manifestation of moving art, and require a high level of mental and physical fitness as well as dexterity from the “danzaqs” or dancers.

Please don’t be fooled, Scissor Dancing is not your every day type of dance style. Every single one of its steps and movements pays homage to the “apus” or “wamanis” – the Andean deities/gods which to this day still have their cult following. Some of these, to name a few are: Pachamama representing Earth, Hannacpacha representing Sky and Ucapacha the deity of the Underworld. When recounting the legends, it is said that the scissor dance dates back to innumerable times because of the “Tusuq Laylas” (the predecessors of the danzaqs), who were the priests and clergy at the time and deserving of the highest respects within their villages.

As was the case in much of the New World, the arrival of the Spaniards caused unrest and upheaval, and in this instance the Tusuq Laylas were accused of “supaypa wanan” – being the devil’s spawns – and were forced to escape persecution and seek refuge within the mountains.  Lacking the capacity to fight back, they were dealt a compromise – they could return to fully integrate into their villages, but with the condition that their “dances” should celebrate the Catholic deities instead.

From December 20th to the 27th one can appreciate from the early morning hours the danzaqs which parade through the village streets on their way to the atrium of St. Francis Church (Iglesia San Francisco), in the city of Huancavelica where the scissor dancing competitions take place.  One of the essential elements of the dance choreography are the telltale scissors made of stainless steel and sharpened on river rocks and whose sound is curiously similar to that of the sound of rainfall in the area.

While the various spectacles take place (each lasting several hours), the village children, women and their assistants also take part in the festivities by “zapateando,” or stepping, to the rhythm of the harp and violin.  In the evenings the “Qolla Alva” – a minor dance competition for apprentices and novices of the danzaqs –  begins, where they strive to execute less complicated versions of the dance, without losing the magical enchantment of the spectacle.

Arriving in Huancavelica from Lima, you would have to take a plane to the Ayacucho region, which averages an hour’s time, and then follow that by taking an inter-province bus which will be more or less a five hour journey, until reaching the destination.

T organize the trip, you could hire the services of local touring agencies like Turismo Andino, whom will cover transportation, lodging arrangements and meal costs with your purchased package, and is accredited by the National Commision of Peru for Exports and Tourism (Promperu).

The best place to stay at in Huancavelica city is the Presidente Hotel, belonging to the Cadena Hotelera del Centro (a hotel chain), and located directly in front of the main square (plaza de armas). The hotel offers room service, cleaners, heating system, work/business area, relaxation lounge, an event hall for corporate functions and a pool.

In addition, the Mercurio Restaurant inside the hotel has some of the best local dishes of the region on the menu, like Mondongo (tripe), la Pachamanca, Chupe de Zapallo, and el Puchero, a super flavorful soup made with cuts of beef and fresh vegetables grown and produced within the region.

Since the Atipanacuy festivals take place during the region’s usual rain season, it is necessary to bring an umbrella with you and a waterproof jacket or anorak, and warm clothing for the chilly evenings where temperatures can be known to drop to 2 Cº (35 º F).