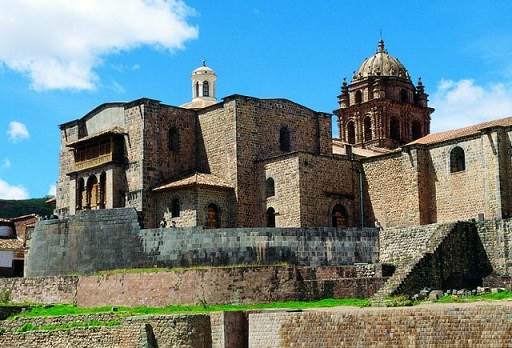 What is it?
The name  Koricancha – or Coricancha- comes from the quechuas voice Quri kancha, “golden temple”, and it is the place where in present times the Convent of Santo Domingo is located in the city of Cusco.

Why is it important?
This temple is one of the most recognized, not to say the most recognized one; therefore is a matter of a sacred place in which it was yielded worship to the Inti  (God Sun), the maximum deity of the Empire of the Inca.  It is for this reason that previously, when people wanted to enter the temple, people had to fast, be barefoot and with some lump or weight in their backs; in this manner they would be expressing humility, an indispensable requirement requested by the oldest priest, Wilaq Umu.

It is said that the facade of this temple was made of an elaborate wall of the finest stonework (or portion of stone work), that was decorated with a greatly finished band of gold, whose height was like the height of a hand palm, and its ceiling was made of a straw that had been delicately cut.  Several of its structures were modified, initially with the conquest, the Spaniards built on the temple what today is known as the Convent of Holy Sunday and subsequently, after the earthquake of 1950. How is it?
The Koricancha is made up by a series of constructions that are centered in the court, species of patio, around the one that was built.  Among these constructions we have:

There was a plate of gold in the facade of the temple, that is currently partly destroyed, as a result of the colonial times.

How to arrive?
To arrive at the temple of Koricancha you can arrive from the Main Square in Cusco  (Plaza de Armas de Cusco), continuing to the street Loreto and turning toward the left along the street Maruri.  The exact address is the intersection of the avenue El Sol and Santo Domingo.  See map .

This temple is a great sample of the fervor and the religious faith that characterizes many cultures, in this case, the Inca culture.