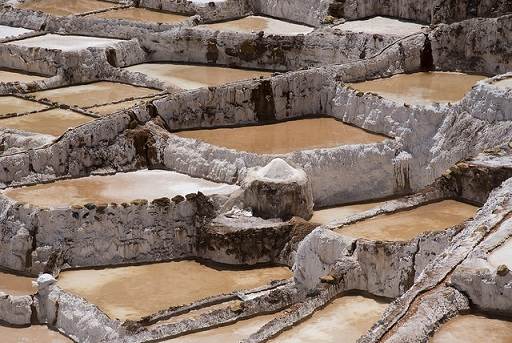 The charming village of Maras is just one of nature’s whimsical indulgences, and on its lands are the most important salt mines of the region. These salt fields, which have been cultivated since the age of the Incas and Viceroyal occupation, have made this village the main center for salt production within the Southern zone of the Peruvian sierra.

The village of Maras is located in the province of Urubamba, at about 46 kilometers (approximately 29 miles) from the city of Cusco and at a height of about 3,380 meters (11,089 feet approximately) above sea level.

Maras is a village that to this day still has loads of visible remnants of pre-Hispanic, Colonial, and Republican times. An example of this, are colonial styled gates decorated with the coat of arms of the noblemen and caciques (chiefs) which date back between the XVI and XX centuries- from this vantage point, its possible to look out at a view of the amazing mountainous landscape that corresponds to the surrounding mountains Vilcabamba and the Valle Sagrado de los Incas.

As the legend goes, the first within the Mara community were part of the Ayar Cachi panaca (a group of descendants)- “Señor de la Sal” (the Salt Man)- who transformed into a mountain somewhere near Cusco. It’s because of this that the Mara people stayed in this area to develop their community, where this mountain stored great quantities of salt mines within it. Within the village of Maras, there is a church and as was established above, there’s plenty of salt mines too. The church however, has a typical architectural style and was constructed with a base of adobe clay. It has a granite cross at its atrium with several canvases by the painter Antonio Sinchi Roca Inca. In his pieces, he’s depicted the apostles with notable characteristics of the Cusco school of art style, and they’ve been placed within the interior walls of the church.

The salt mines are in Qoripujio, at about 4 kilometers (2.5 miles approximately) away from Maras and it’s a place that you shouldn’t pass up on. These mines were already known and cultivated by the Incas, whom would conduct economic and merchandise trade deals with the salt from that was produced from them.

Maras is a place with a lot of history to it, and you should definitely visit if you’re staying in Cusco. You’d be witness to the beautiful landscape of the surrounding mountains- with their color palettes of cream and white- which are still used to crystallize the salt in water.
Remember, that to get to Maras you can take a bus that departs from the city of Cusco, and the ride will approximately take an hour. From the village of Maras there are two routes of transportation: one going towards the salt mines of Maras; and the other going towards the archeological site of Moray.