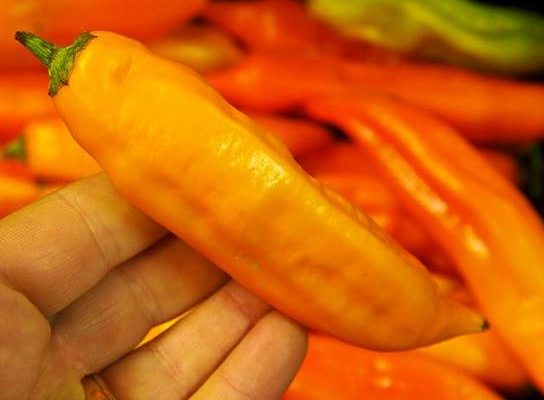 It´s no secret: Peru is all the rage and Peruvian food, which is quite literally on the tip of everyone´s tongues, has taken center stage. What sets the nation´s dishes apart from the rest of the world is as much the preparation as it is the fresh ingredients. After all, without this special combination, lomo saltado is nothing more than steak and potatoes. One ingredient that really brings even the simplest foods to life is ají, a type of chili pepper endlessly used in everything from chifa to ceviche. It´s been used as long as people have been cooking in the country currently known as Peru (we´re talking about 7,000 years), so the trial by fire (pun intended) period is over. Peruvians have the ají, and how to use it, down to a science.

It seems that nearly every country has its own version of steak and potatoes. In Peru, it´s lomo saltado and some say what sets Peru´s version apart boils down to one ingredient: ají amarillo. The small but integral ingredient takes a very basic plate – beef and root vegetables – to the next level by adding flavors your tongue never knew existed.

While the name calls them yellow, they actually come in varying shades of orange. They add a little kick and loads of flavor to any recipe they are added to. This pepper is, by far, the most widely used spice in Peruvian cooking.

Whether you are a world-renowned Peruvian chef or a grandmother in a rural village, chances are you use this spice to take your recipes from drab to fab.

You´ve heard of the saying “never judge a book by it´s cover, ” right? Well in Peru, never judge a pepper by its size. While no bigger than your thumb, this pepper packs a spicy punch, so take care when eating it. These beauties come in all colors of the rainbow – red, yellow, orange, purple – though the rojo is most commonly used.

I love incredibly spicy food. When I say incredibly spicy, I´m talking “turn me red, break me out in a sweat and make me regret my decision later ” spicy. For this reason, I do not find Peruvian cooking (which goes beyond traditional Peruvian plates) to be all that spicy, even when I say “extra picante, por favor. ” That is with the exception of one pepper: ají rocoto.

Used in one of Peru´s most renowned dishes, rocoto relleno, this ají is the hottest of them all. It is so spicy that cooks wear gloves when chopping it up.

When its veins and seeds are removed, it becomes less spicy and easily edible. It´s only then that you can truly enjoy its flavors.

Take care when buying peppers in markets. While rocoto, which comes in red, orange and yellow, looks very similar to a bell pepper, it is anything but a bell pepper. If you are unsure, just ask. I have had friends make this mistake; trust me, you do not want to do the same!

Ají: Sauce It, Paste It, Powder It

Sit down at any restaurant and you will see a pot of reddish or orangey liquid. This is salsa de ají, Peru´s version of Tabasco. Dab a little of this on your meat, vegetables, rice, potatoes or stew to experience a complex flavor. Take care though. Unlike Tabasco, most of the salsa de ají found in restaurants is homemade so the degree of pica varies. I usually blot a tiny bit on the back of my hand and taste it with the tip of my tongue, that way I know just how spicy it is before I douse my food in it.

Peru Pro Tip: Your home country likely bans you from bringing agricultural products from Peru. This means you can neither take ají peppers nor ají seeds in your suitcase. But there is a way around it. Hit up a market or grocery store for bottled and bagged ají sauce (salsa), powder (polvo) and paste (pasta) that you can take home to use in your own cooking. Plus they make great gifts for your friends and family back home.