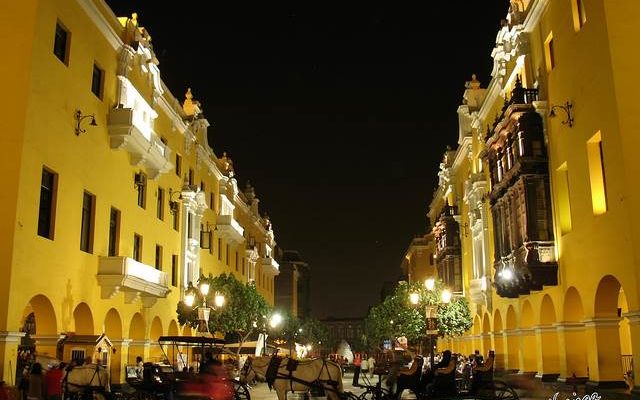 it’s frequently unfavourably compared to Cusco. I’m always kind of surprised by this as I had a great time there. Admittedly Lima has faults, as with many capital cities: it’s a bit of an urban sprawl, there is a lot of poverty and it doesn’t have the sense of cohesion enjoyed by smaller, older cities such as Cusco. But if you’re prepared to delve into the nooks and crannies of this massive city, then you can find plenty to admire.

We flew in to Lima late at night, giving us a taste of Lima’s massive size: landing, over the plain, over the nearby hills, the city lights stretched as far as the eye could see. After the inevitable customs and immigration formalities, we saw the sleeping city through the coach window, passing through neighbourhood after neighbourhood as we crossed from one side of the city to the other. By the end of the journey I was daunted but fascinated: I couldn’t wait to explore, this place would be a real challenge. Next morning, the city I had begun to equate with so much light had already changed its mood and was now misty and dreamlike. This was the garua, the mist that sets in between May and October, giving the neighbourhood of San Isidro (the main business district of Lima) a slightly surreal quality. But hey, we thought, we’re British, this is nothing – and headed off for the day.

After a walk round this area, we hit the Plaza de Armas, always the best place to start in any Latin American city: here (how can anyone say that Lima is ugly?) we found a handsome colonial style square, including all the important buildings, the Government Palace, the Cathedral and the town hall. Granted these buildings were a bit yellow!: but it certainly suited the lively feel of this square – there was a Sunday music festival on and the benches were crowded with Peruvian families from grandparents down to small children. We spent some time pottering about this area, savouring the friendly atmosphere. We were lucky as a Peruvian friend had arranged for us to visit a beautiful example of a colonial mansion house (normally people are only allowed into the inner courtyard, but we were fortunate enough to be allowed to explore much of the house). While in this area we also managed to visit the baroque Church and Convent of San Francisco, mainly for the purposes of scaring ourselves in their bone-filled catacombs! It was certainly atmospheric, dark and tight on space, with the main source of light seeming to come from the gleaming whiteness of the bones, not preserved as skeletons, but with each type of bone grouped together, the skulls piled in spirals in what looked like an old well. To complete our education we decided to go to the National Archaeology and Anthropology Museum, where we marvelled at the beautiful ancient pottery as well as cultural objects.

The next day we headed down to look at the sea in the Miraflores district. Just the walk down there was an experience: the bustle, shops and markets and the traditional costumes of many of the locals vividly expressed the unique culture of the city. It was raining by the time we got down to the sweep of beaches comprising the Costa Verde, but we took shelter and people-watched over a pisco sour. When the rain stopped, we headed for dinner in the bohemian Barranco neighbourhood in search of Peru’s famous writers and intellectuals (if we met any I didn’t recognise them). The night-life is pretty good too if you like basic style bars with impossibly loud music and a mainly local crowd.

I felt invigorated after my trip to Lima, as I knew this city had not been white-washed for tourists unlike other, more popular destinations: it felt like a place where people lived and worked, not a showcase. Perhaps that’s why many people don’t like Lima, it refuses to conform to the expectations of tourists and although it has a rich heritage it is not bound by its past. Instead what you get is a modern city, trying to be prosperous and proud of its natural identity. I only hope that the recent earthquake hasn’t crushed its spirit too much.