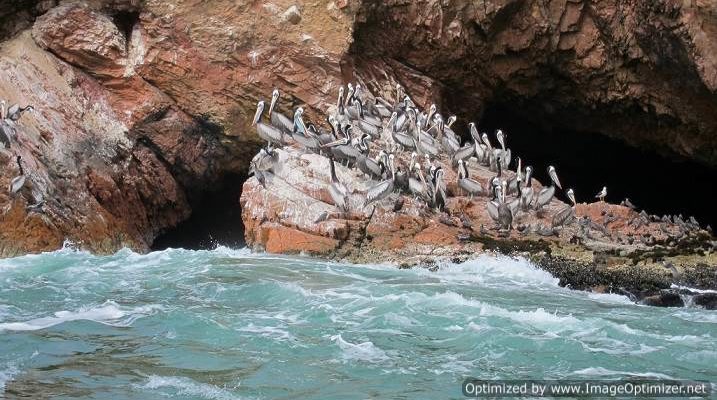 ‘Not the Galapágos, but similar’ – this was how a guy I met in Paracas explained the Ballestas Islands to me. If they were anything like the Galápagos, which I’d visited a few years previously, then I was sold. So we booked onto a boat trip, the only way to see these protected islands, as tourists are not allowed to disembark there for conservation reasons. The islands are not visible from the shore, so we climbed into the panga without any real sense of where we were heading, excited by the guide’s promise that we were going to enjoy our trip. We soon were zooming out of the harbour into the open sea, overtaking many local fishermen on the way (including one guy who was pulling in a very large red octopus as we passed him!).

On the way to the islands we were also shown the perplexing Paracas Candelabra (even though it’s called a Candelabra it looks more like a cactus to me), similar in its way to the Nazca lines, but apparently carved more deeply in the rock. This view of the Candelabra, with the sea crashing against it and the sound of sea-birds in the air, was very striking. Theories about this symbol, as with the Nazca lines, abound – it might be a religious marking, an ancient road sign (it points in the direction of Nazca) or, some say, a pointer to treasure left by pirates in the 17th century! Archaeologists have some strange theories…to me the symbol seemed most meaningful as an art object, an affirmation of human creativity. We could now see the Ballestas Islands away in the distance; several tall islands of red rock rising from the sea. The guide swung the boat out towards them, revving the engine. The shoreline of the islands was quite rugged, as the sea can get pretty rough and the violent waves have eroded each island to form dozens of natural caves and arches. The islands were actually named for these distinctive rock-arches, with ‘Ballesta’ meaning an archer’s bow. These rock formations were really beautiful, augmented by the different colours of stone, including every shade from smoky grey, to sand, to scarlet. The lack of any sign of human presence (there are no cruiseships or yachts as in the Galápagos) made certain islands look otherworldly, like the surface of some desolate planet.

As soon as we got near the islands, the abundance and variety of the wildlife was visible. The quantity of birds was particularly obvious from the huge amount of guano, covering the red rock of the islands with baked white clay – which, surprisingly enough, used to be Peru’s main industry, used extensively by Europeans for fertiliser. It was about this point that I covered my head in case of seabird attack! Even stranger there were still a few guano factories on the islands, which guys live on for two months at a time like oil riggers (in fact on the way back we had to deliver a barrel of water to them, which they pulled up onto the island with a rope!).

The wildlife though, when we got close, was spectacular. On each island sealions and rare birds, including playful Humboldt penguins, clumsy-looking Peruvian boobies, dignified cormorants and graceful pelicans, swarmed in uncountable numbers, jostling for space. There was no need for binoculars, the guide on several occasions steering the boat so we were almost nose to beak with the birds. The animals even came to us – sealions particularly played and dived around the boat, splashing each other, one of them ‘doing the shark’, sticking its flipper up like a dorsal to scare us. Even though we spent over an hour circling the islands, it didn’t seem enough and we were sad when we turned back towards Paracas.

It was a unique experience. Although the Galapagos archipelago is certainly larger and more beautiful, these islands and cliffs are clearly a rocky paradise for wildlife and are definitely an essential visit for anyone interested in wildlife.