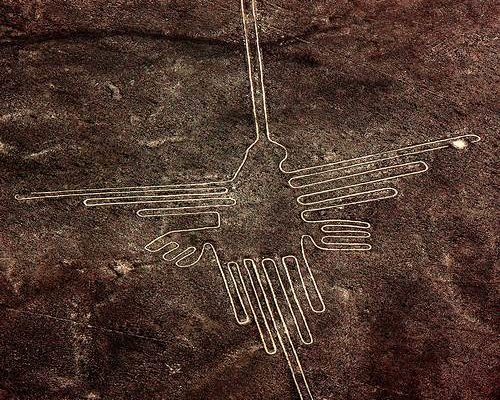 All day we had driven the Panamerican Highway, seeing nothing but desert, and the view from the bus window, though beautiful in its way, looked no different. But suddenly our guide announced ‘we’re here!’. Here was where? Just outside Nazca, home of the famous Nazca lines, drawings inscribed in the desert by a Pre-Incan tribe, the Nazca. But still I could see nothing – no wonder these drawings had gone undiscovered until the 1920s, when commercial jets began to fly over this area. The ground in front of me seemed flat and featureless.

Still just before sunset we stopped at a tower erected to allow Peruvians (who cannot always afford the expense of the touristic bi-plane ride) to view this important part of their heritage. From this vantage I could see two of the more famous of these drawings, called ‘the hand’ and ‘the tree’, in reference to their shape. In the light of sunset these drawings seemed bafflingly huge, bafflingly beautiful. The lines themselves, formed by carefully scraping away the top layer of rock to reveal the lighter coloured stones underneath, seemed to glow. I couldn’t wait for the bi-plane ride we had booked the next day.

In the morning, Nazca turned out to have the desolate air of most desert towns, despite its size and bustle. I later learned that it had not rained in town for over two years; the river had dried up completely. As a result people in this town had an essential reliance upon their heritage – the irrigation channels dug by their ancient ancestors were their only water supply. We viewed some of these channels on the way to the airport and i was amazed at their sophistication: not only were they covered to prevent contamination of the water but shafts for maintenance were also built into them. I would guess they were about two thousand years old: this civilisation was clearly very advanced. The Nazca lines themselves soon proved this. We went out to the little airport and eventually got in the bi-plane, a frail-looking old plane that I was, admittedly, slightly nervous about. Still we took off without a hitch, gliding effortlessly away from the town, back into the desert. When we reached the area where the lines were I was surprised to see so many different areas of geometric patterns, sequences of lines as well as the more famous shapes, such as the animal and bird designs (including ‘the spider’, ‘the dog’ and ‘the hummingbird’) and the human figure dubbed ‘the space man’.

Looking down out of the window was quite dizzying as we spun slowly round each of the designs, particularly as I was trying to take pictures. The scale of these drawings, many of them on top of hills or in remote areas of the desert, was really startling, leaving you in awe of the ancient people who had designed them. This degree of artistic complexity, particularly considering that the Nazca had no vantage point from which to view their own work, seemed to put other forms of ancient art in the shade.

Although the purpose of these works was mysterious, seeing them certainly allowed us a sense of the might of pre-Incan civilisation. By the time we landed again I recognised this short plane trip as one of the most special experiences of my life so far.