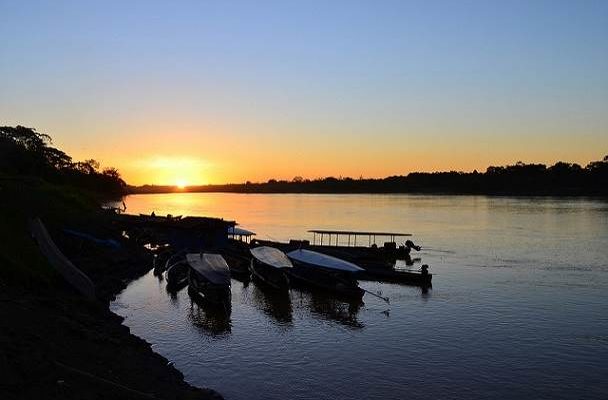 Puerto Maldonado was a bit of a one horse town, I sensed as we got off the plane. The airport was about the size of my old school hall and the town itself looked run-down. Still we would be staying in an eco-lodge about an hour away from Puerto Maldonado, down the Madre de Dios river, a major tributary of the Amazon. We were picked up at the airport by a guide from the Reserva Amazonica, then taken to a little motorboat, leaving most of our stuff behind in a lockup. No luxuries here, but I was looking forward to making this trip – I had wanted to visit the Amazon since I was a kid reading D.K. books about wildife.

The river-trip to the lodge was an eye-opener: timber-yards lined much of the way and in places there were very few trees. There were also barges at several points of the river, together with lots of complicated machinery: ‘They’re dredging for gold,’ our guide, Moses, said when I asked him. This was a shock. Despite all that I had read about the destruction of the rainforests my image of the Amazon was still very much as the unspoiled Eden that I had read about in my childhood. But still I knew at the same time that in this poorer region of Peru, these people were just trying to provide for their families. Further up the river things were more peaceful, the tree-line apparently undisturbed. Here you could see more clearly just how shallow the river was (it was the hot season when we visited). I questioned Moses about the animals we were likely to see, in particular about jaguars, a prominent feature of D.K. Amazon books, but learnt that we would be unlikely to see a jaguar in this area. In fact although Moses had been raised in this area, he had only seen two in his life-time. Not good odds then. (In the end I counted myself lucky to even see a jaguar paw print.)

When we arrived at our lodge we had a bit of lunch and quickly set off exploring. We had a walk round and I was struck by the amount of birds, particularly parrots, flying overhead. Then we went on an early evening expedition to see caimans: apparently they only come out of the water after dark. It was a strange experience riding in the motorboat at night, with Moses shining his torch into the eyes of these scaly beasts. The utter darkness of the forest away from the lodge was particularly eerie. When we got back to the lodge it was even stranger, as I had forgotten that there was no electric light: to get back to our cabin after dinner we had to use oil lamps and use this meagre light to get to bed.

The next day we got up early to go to the Tambopata reserve and visit the Sandoval lake, a vast natural lake deep in the forest. We got the motorboat to the other side of the river, walked for a couple of kilometres through Tambopata (seeing a variety of wildlife on the way) and then took a small canoe up a narrow channel towards the lake. Moses, with whom I got on pretty well with by now as he was helping me improve my Spanish, told us that only a few weeks ago, a local man had been seized by an anaconda in that very channel and had barely escaped with his life. So we were all pretty nervous after that! When we reached the lake, however, it was more peaceful. Cruising in the canoe we saw several different types of birds, some terrapins and red spider monkeys – but fortunately no anacondas. In the afternoon we visited the lodge’s rope-walk, which gave us a view of the forest canopy. Finally, in the evening, we went on a night-walk into the forest with Moses, and saw many different species of tarantulas and bats. Our last day was spent bird-watching and looking at orchids, before leaving for our flight to Cusco.

Although my preconceptions about the Amazon were challenged by my trip, I was not disappointed. I definitely hope to return one day for more time in this fantastic region.