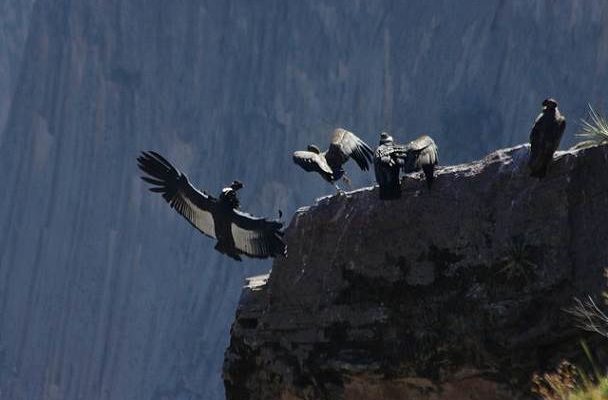 We had to get up insanely early. We had been staying in a hotel that was quite far from Condors’ Cross, arguably the best place to see condors in Peru, and the mountain roads meant that it would take at least two hours to get there. Still I felt sorrier for the locals in the nearby village, who, knowing that tourists were likely to come through the town had got up a kind of traditional dance and a show including llamas and birds of prey. Lovely and polished though it was, it felt too early for that kind of thing.

I’m not exactly a serious bird-watcher, but still I was excited to think I might see some condors: I associate them imaginatively with Peru and South America as a whole, symbolic of a kind of cultural pride. However, when we arrived at Colca Canyon there were no condors to be seen, we were too early for them too it seemed – the sun had not been up quite long enough to establish good thermals. Still there were quite a few other travellers around and the sense of anticipation gave us something to talk about. Fortunately there was also a little market to amuse us while we waited – and the scenery itself was strikingly lovely, all cacti and terraces, under an azure sky. It looked almost like the set of a Western, almost unreal. After a time it was just a waiting game, we sat chatting on a wall watching the shadows of the cacti lengthen over the ground. Eventually a pair of condors appeared, circling far off, two glossy black specks in the sky, with white bands at their throats. They flew in a strange but graceful manner, with their wings held stiff and immobile, riding the warm air currents like natural hang-gliders. But we had to wait even longer until they came closer – then one settled on the far edge of the canyon, very close to those near the buses but quite far away from us on the observation platform. It spread its wings proudly, preened a bit, and then flew off again.

Meanwhile the other bird, excitingly, had started to come closer, it was flying in wider and wider circles: it was only a matter of time until it reached us. When it did come, it came suddenly: I could see that it was heading towards us, but instead of circling round it soared straight up the canyon, literally over our heads! I only registered how huge it was when I felt its massive shadow pass over me and I shivered, thrilled. After that the birds flew around us quite a good deal before we had to leave, but there was nothing to match the buzz of that first encounter: it was obvious how lucky we had been looking at the pictures afterwards. I would have got up early for this magnificent experience ten times over.