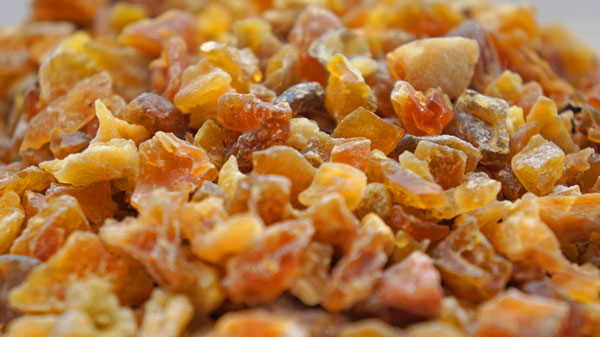 Papa seca, or ‘dried potato’, is a traditional Peruvian ingredient with its roots firmly in the past. These crystal-like nuggets of potato have been produced by Andean peoples for thousands of years to preserve the crop for months, or even years. Nowadays it’s commonly used in the hearty Peruvian stew carapulcra, and similar variations occur regionally in Bolivia and Chile.

How do I use papa seca?

Most commonly, papa seca is used to make carapulcra. Carapulcra is a hearty meat and potato stew made with peanuts, chillies, and chocolate.

Even so, as one of the “secret ingredients” for cooking Peruvian dishes like carapulcra, you can experiment with them quite easily to create your own ideas.

Being such a popular dish, carapulcra recipes are very numerous – and every family will have their own favourite! That’s why, although there are some rules to follow, there are also variations in the way the papa seca is used.

That said, everyone agrees on one thing – they need softening up! When you get them from the bag, they will be rock-solid crystals. To do this, most people recommend that they should be soaked in water for a couple of hours before use. If you want, you could even soak them overnight – they will still be fine to use when you get home the next day.

On the other hand, if you have a dish which will be cooking for several hours, for example in a slow cooker, you could try mixing them in straight from the bag, as you wouldn’t necessarily need to soak them beforehand.

They’re a versatile ingredient, as they can be added to soups or stews to add a new taste and texture to dishes that you already enjoy.

How is papa seca made?

Dried potatoes are made over a few steps. Firstly, they’re boiled, drained, peeled and cooked into small pieces. After this, they are traditionally dried in the sun, losing all their moisture. This is done in a cold environment, and at the end of the process, they have turned into small crystals.

Papa seca has been produced by people across South America since ancient times, when they were left out on the slopes of the Andes mountains to preserve the crop after harvesting.

Does it come in any other forms?

As the potato is native to South America, it’s perhaps to be expected that so many types have been developed!

In Bolivia, papa seca is also known as chuño. They look different to Peruvian papa seca, as they often come whole, however our papa seca would make a great replacement for chuño in popular Bolivian soups such as chairo (below).

Dried potatoes have also been ground to make a type of flour, which is also known as chuño flour (harina de chuño). This flour is used in diverse dishes, from drinks (such as mazamorra, a thick, smoothie-like sweet drink), desserts (such as alfajores and sponge cakes) and savoury dishes and breads.