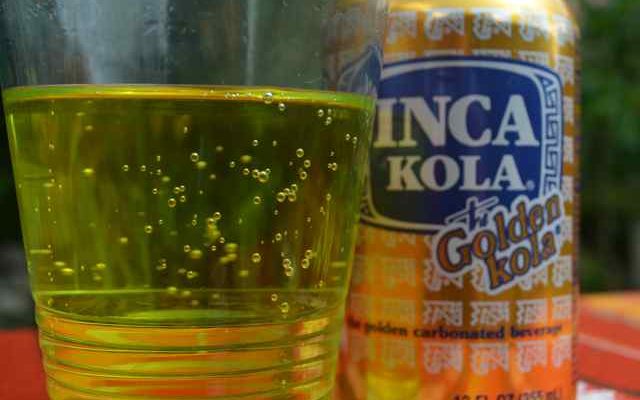 Coca Cola is undoubtedly a global giant. One of the world’s biggest brands, it’s officially available in every country in the world except North Korea and Cuba… where it’s apparently available on the black market anyway! Love it or hate it, you can’t escape it – and it’s incredible popularity is second-to-none. Here at Viva Peru, it’s been the most requested item for us to get in stock – so now we’ve finally got some, we’re very happy!

Second-to-none, that is, except in two countries. Those countries are Scotland, where Irn-Bru leads the way, and Peru, where you’ll find Inca Kola. Any visitor to Peru will have seen it – bright yellow-green bottles of the fizzy stuff in every shop and restaurant’s fridge, practically glowing with sugary energy!

Inca Kola is a legend in Peru. The beater of a global giant, the home-grown alternative to American brands, it’s even talked about as a source of national pride. Here are some of our top facts about this world-beating soda!

1. It’s made with an indigenous South American herb

Lemon verbena, or hierba luisa in Spanish, is a plant native to South America which had long-since been used to flavour dishes and infusions. Similar to lemongrass, it releases a lemony frangrance when bruised; and alongside the other ingredients it combines to make Inca Kola‘s zingy, unique taste. First-timers normally think it tastes a bit like bubblegum or cream soda!

2. It was invented by a British immigrant

Joseph (José) Lindley landed in Peru in the early 1900s to start a new life in the Americas. Soon after, the Lindleys started to bottle infusions and sodas, which they were inventing with local ingredients and selling in the capital, Lima. Little did this English family know that when they set out for Peru, they would ultimately end up creating one of the country’s biggest ever businesses, which is still around to this day.

3. It was launched to celebrate Lima’s founding

The family launched Inca Kola on the 400th anniversary of the founding of Lima, in 1935. From this day, the link between Inca Kola and the Peruvian identity was born. Ever since, traditions icons and imagery have been used to promote this drink. It’s slogans reflect this – over the years it’s been “It’s ours – the drink of Peru”, “The taste of Peru” and “The drink with the national flavour”. It’s also one of the few brands to celebrate Peru’s ethnic diversity in its advertising.

To grow Inca Kola‘s popularity, the family tried all sorts of tactics. Here’s one quote from them:
“We’d go to all the restaurants, we were about 12 people, and we’d always order the best and most expensive dishes. We’d then order Inca Kola to accompany them, and if they didn’t stock it, we’d cancel our order and leave. The next day one of our sales people would show up and offer them the drink, and of course, they’d buy it.”

5. McDonald’s fought for the right to sell it

Once the Lindleys had made Inca Kola indispensable in any Peruvian restaurant, it became hard to change!

Take McDonald’s for example, who have a long-standing relationship with the Coca-Cola Company which continues through to this day.

When McDonald’s arrived in Peru, they realised that they needed to sell Inca Kola to attract the local market. However, they already had an agreement to exclusively sell drinks from the Coca Cola Company. After much negotiation, they changed their agreement with Coca Cola so they could sell Inca Kola in Peru. It was the first time they had ever done so, anywhere in the world. It was just so popular, there was simply no other way!

McDonald’s in the sacred Peruvian city of Cusco. A good thing? You decide!

Whether it’s a good thing that McDonald’s have also reached Peru is for you to judge – but it’s definitely a sign that Inca Kola is important when even they can’t refuse.

6. Coca Cola changed their recipe to try to compete

In a final act of desperation, Coca Cola tried to alter their recipe for the Peruvian market. Once again, it didn’t work – and despite all their efforts, Inca Kola continued to take the country’s number one spot. After splashing out millions of dollars trying to beat the local brand into submission, Coca Cola admitted defeat and offered to buy Inca Kola from the Lindleys.

The Lindleys refused to sell Inca Kola in its entirety, but did allow for Coca Cola to invest in the brand. Coca Cola own less than half of the company today, and the Lindleys maintain overall control; but with the added strength of the global giant they’ve been able to grow it’s popularity even more… and stop fighting for the top spot!