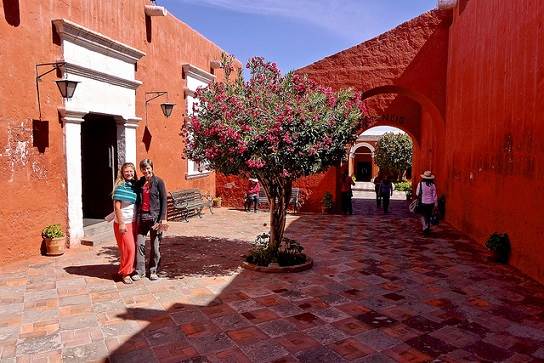 One of the main characteristics of the villages in the south of Peru is the great fervor that they profess for the Catholic religion.  In each village, no matter how small, one can find large churches adorned with gold and magnificent paintings that make up part of the history and fervor of each of its inhabitants.

In the city of Arequipa , the highlight is the Santa Catalina Monastery, constructed up to 1580 in honor of Saint Catalina of Siena, in order to shelter the daughters of the noblest families of the city.  It was an absolutely cloistered convent until 1970 when the nuns decided to live in the community and leave its cloisters to be visited by tourists.

The Santa Catalina convent is a small citadel constructed of mud and ashlar with magnificent paintings al fresco that occupy a 20 thousand square meter area and is divided into four neighborhoods, trying to emulate the Arequipan urban distribution of the first years of the Colony. During Viceroy’s, Francisco de Toledo’s, visit, he who pacified the indigenous rebellions, the construction of a convent of nuns dedicated exclusively to the cult of the Catholic religion was approved near the center of the city.  The construction was carried out quickly and in 1579 it was inaugurated.

The first women that enrolled as novitiates to the convent were of Creole or Mestizo origins or the daughters of the curacas (magistrates) of the most important villages of the Chili River.  However, in 1582, a large earthquake destroyed a great part of the monastery.  In spite of the town’s petitions, the monastery remained cloistered and the nuns stayed in charge of its reconstruction throughout the years.

Recently, during the Republican era, Spanish nuns enrolled in the convent so that in 1970 the Great Reformation occurs and the nuns give up the cloister and go to live in the community.

Ashlar, the characteristic rock of the Arequipan volcanic ground, was used.  Its architectural style is based on Spanish influence but done by Indigenous hands.  That is why, different from other public colonial constructions, one can find in Santa Catalina a fusion of Spanish and Indigenous elements creating something original.

One important characteristic is the shape of the cell doors.  Earthquakes were the cause and origin of the expansion since the families decided to build private cells for the girls enrolled at the convent, which is why a standard was established that was followed for more than 300 years.  In order to assure security, the doors thresholds was slightly higher to the level of the floor and its ceiling was considerably lower thus giving more resistance to telluric movements.

When the decision was made to open the doors of the monastery and the restoration of the frescoes painted on its walls was initiated, a huge collection of religious painting from the indigenous school was found.  Approximately 400 pieces were restored and it is currently one of the most important collections of religious paintings in Latin America.

Its historic importance is great due to the fact that one may see in them a great selection of the Cuzco School of painting where both Inca and Spanish elements united to represent how the Indians lived the Catholic religion.

How to get there

The Santa Catalina Monastery is located near the Plaza de Armas by the left lane of the avenue the runs next to the Basilica of Arequipa.  The entrance fee is 30 soles and there are tour guides that speak English, German, Italian and Portuguese.