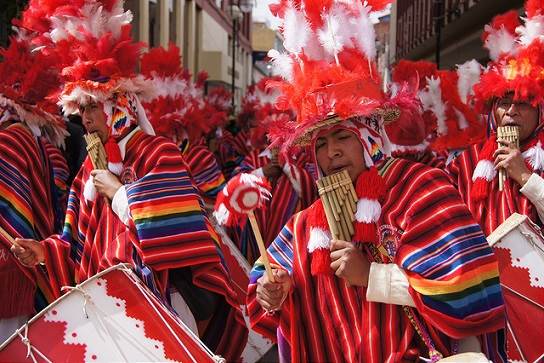 The andean folklore of Peru originates in the fusion or interpretation of two distinct varieties: the andean, represented by all the villages influenced by the Incan Empire during its era of expansion, and the punean, represented by all those civlizations which lived before the Incas and who managed to maintain their culture during the years when they were governed by the Incas.

Puno is a Peruvian department located on the border with Bolivia, also known in the viceregal times as the Old Peru. Both countries maintain very important ties, owing to the fact that both civlizations matured like sisters and influenced each other.

The department of Puno is known as the Capital of Peruvian Folklore and one of its most representative dances is the Diablada: a great choreographical display that was created during the viceregal era and which represents the way the Aymaras saw their world change when the Spanish arrived. Another very important celebration is the Virgen de Candelaria, which is celebrated during the month of February. This time is when Puno receives the highest amount of visiters, just as much from the rest of Peru as from abroad, due to their wanting to learn how the people of Puno show their culture through dances, colorful outfits, and a great display of faith.

Another very widespread and well-known dance shared by Peru and Bolivia is the Saya. In a form of artistitc expression characterized by delicate, sensual swaing of the women and the agile movements of the men, who, jumping, sing to the rhythm of the music. This type of dance was born as a homage to the african influence and aymara culture, from which the basic moves of this dance are inherited. The dress of the female dancers are very elegant and youthful, marking the break from other typical dances, whose costumes are very elaborate and traditional. But the dance with which Puno identifies itself as a city is the Huayno Puneño, which dazzles the entire population. It is in reference to an old artistic expression of the citizenry, which was coined during the time of Peru’s independence when the tyranny of the Spanish viceroys over the indigenous people took place, for which this dance awakens a nationalist sentiment very endemic to the region.