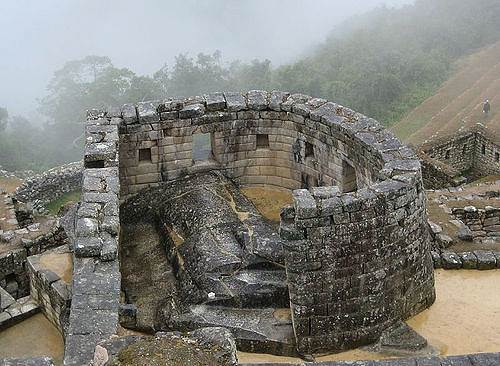 Once you reach the citadel at Machu Picchu, the first thing you’d find is the so called “Gateway to the Main City,” which is the only entrance on the southeast side of the citadel. It allowed the public to enter in an orderly, civilized manner when returning from the outside and from having done their daily labor.

Once inside, after going through the entrance, you’d come face to face with a semi-circular structure, constructed over a big solid rock. You can instantly notice that this structure has two trapezoid shaped windows (wider at the bottom; narrower up top) which had been inlayed with precious stones and gold during its time of use. This is the entrance to the Temple of the Sun, the most important religious center of Machu Picchu.

During its origination, the Temple of the Sun (el Templo del Sol) was a highly protected enclosure. The only ones allowed to reach this temple were the priests and the Inca, because even the floor of the place was considered highly blessed and sanctified! For the rest of the population…well they just had to make do with the public rituals held at the plaza which was open to everyone. In the past, the entrance to the Temple, had a great massive double enforced wooden door, which was secured by a unique mechanism using rings made of stone. The purpose of the door, was to block the passage and prying eyes of curious individuals while the ritual to the Sun God was taking place.

Aside from being the seat of the religious ceremonies, the Temple of the Sun was also in its time an important scientific center. In a semi-circular formation, you’d be able to see that the two trapezoid windows faced towards the north, while the other faced east. Through the projection of the shadows cast by the windows over the rock placed at the very center of this structure, the Incas could identify the appearance of the Winter Solstice. In other words, they were able to tell in this way, when the winter solstice would begin and therefore when their agricultural labor for the Empire should commence. In both windows you’d notice that the exterior of the windows had a small bar carved or sculpted on it, which served to place specific pottery pieces that were thought to facilitate the movements/measurements of the sun.

A Center for Sacrifice

At the center of the Temple of the Sun, there also existed a rock carved altar, whose purpose and main use was to serve during the celebrations of the rituals honoring the gods. On top of this piece, the High Priest would place live animal sacrifices and he’d then read the destinies to come, or what was to happen in his empire, from the organs and entrails of the sacrificed animal. This ritual was done in order to allow the priest to give the Inca advice and direction about important topics dealing with the governance of his empire.

And the Inca, on his part to ensure the Sun god’s approval, had to drink the chicha (a fermented drink usually made of maize). By doing so, he was entering in a sort of communion with the Sun God- his father, and together they entered into an agreement that would allow the “reading of the entrails” to be a true and good read. This was important because it was, after all, how the Inca would make his decisions.