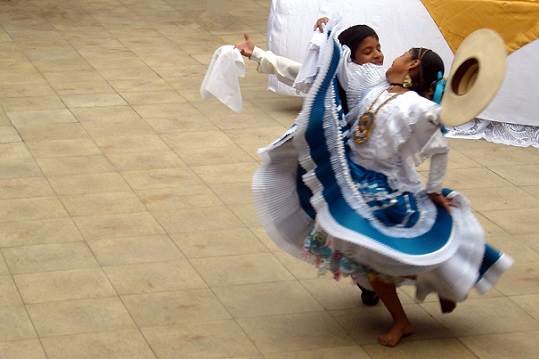 The national dance of Peru, famous for its strenght, flirtation and sensuality is the reason for this post.

To Northern Marinera is a typical couple dance of the coastal regions of Peru. This is a beautiful and stylized representation of the entourage of a gentleman and a lady.

The role that is carry out by the two dancers is very well defined: the lady flirts to the suitor with a lot of grace and mischief being approached and moving away from him, while the second one advances are responded with pride by its counterpart. In both cases, the dancers agitate elegantly handkerchiefs during the dance.

The Northern Marinera is a dance of notable elegance and style. This dance has a notable variation that involves a gentlemen riding on top of a Peruvian Stepping Horse and directs himself the dance that is performed by the equine.

The music that accompanies the Marinera is a dynamic piece played in compass of 3/4 (as the waltzes) interpreted in most cases by military bands with tarolas and bass drums.

The pieces are comprised of two identical sections that are played in succession of the other and they are called “First” and “Second” (and is exactly from here that the say “there is not first without second” is used to be exclaimed in the small interlude between the two movements. The first marinera that has been registered is the famous piece titled “La Conchaperla” expressed in score as a group by Abelardo Gamarra and José Alvarado, but composed by the great Rosa Mercedes Ayarza de Morales, at the beginning of the 20th century.

The origin of the Northern Marinera and the other variations (the limean and the mountain one, of these ones we will speak in another occasion) is unknown. What we know for certain is that its name was changed from the old one “Chilena” to the current one, in full war with Chile, in honor of the heroic feat of the immortal Admiral Miguel Grau Seminario.