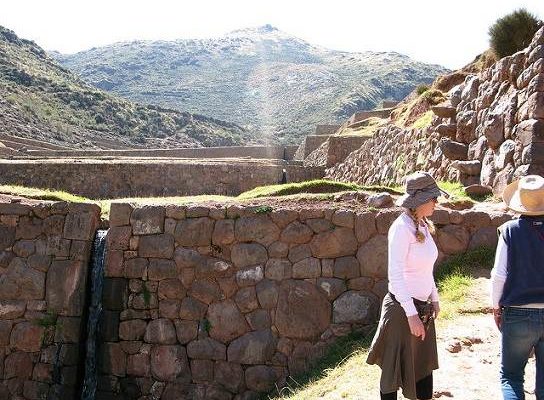 Cusco is an ancient city that was characterized because it was the center of the Inca Empire, where the culture of the Inca has left beautiful traces that still persist today as ceremonial centers, fountains, etc. One such place is Tipon.

Tipon is an archaeological park that is truly beautiful, because in it you can be a spectator in the domain that the Incas had hydraulic engineering, where the irrigation system is amazing and irrigation canals are vertical and horizontal, located on stepped terraces.

The water comes from underground to the sources, where it is distributed to all channels of the system.

This archeological park belongs to the district of Oropesa, province of Quispicanchi.  It is located 23 km from the city of Cusco, in the southeast. Also, at an altitude of 3,560 meters, approximately. On the other hand, Tipon is made up of several areas, some of these are: There are rooms with niches (holes in the walls) of trapezoidal shape from where you can observe all the people of Tipon in all its glory.

These are the rooms and fabulous gardens built with huge blocks of stone, by order of Huiracocha to his father Yahuar Huaca. This construction is the most complex of Tipon, because in it we find the beautiful fountains and water channels which continue to operate until now.

These rooms are located within 1 km of Intihuatana. They have been built in stone and finished with adobe, so it is presumed to have belonged to people who were not of the nobility.

It lies north of the archaeological site of Tipon and from this point you can see the western part of the city of Cusco. As the story goes, this was an important place because it was the residence of characters with political and economic power of the Incas.

It is presumed that entire area of Tipon had been initially occupied by dominions that freed internal wars, for which to way of defense, they built some immense walls to be protected.

As we have already seen, Tipon was a center of agricultural production of much importance, where was emphasized its hydraulic systems and railway platforms; but its beauty not only situates in this but also in the fruitful aspect of its lands to today’s date.

You cannot pass the experience to get to know Tipon and its sources of water.