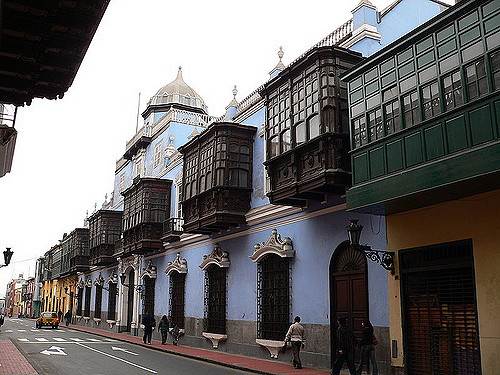 One of the most recognized icons of the Historic Center of Lima are the balconies of the houses of the old Lima aristocracy, which adorn small streets and give a sensation to be travelling in the time of the colonial era, with all the grace and elegance that characterized it in the time of the Stately Lima.

Among them is emphasized the Osambela House, headquarters of the Inca Arts Center Garcilazo de la Vega, that is characterized for its extensive outward appearance and the excellent state of conservation of its baroque balconies.  Its colonial style shows the combination of different construction techniques, since its began being built during the 18th century and was finished between 1803 and 1805.

This house calls the attention of those interested in colonial architecture for two particular elements that distinguish it from the remainder of Lima colonial houses.  In first place, the rooms of the Osambela House are parallel to the street, for which their facade is extensive enough to harbor 5 rococo balconies of the French style.

Likewise, the distribution of its patios is found in reverse, in relation to the facade, which differentiated it from other houses of the virreinal times.

On the other hand, it possesses four levels of elevation, being the normal thing in times where houses possessed only two levels.  The fourth level is very special, because there is a  look out window of octogonal shape, a detail that was prohibited due to earthquake precaution, because a few years before beginning its construction, Lima had been whipped by an earthquake. The name of this house was inherited from its owner, the Spanish lieutenant Martin of Osambela, Marquis of Osambela, who acquired the land after the earthquake before mentioned.  Member of the aristocracy, its house was the setting of a formal dance for the arrival of the Liberator Mr. José of San Martin, who lodged in its rooms after having declared the Independence of Peru in 1821.

The Osambela House is located two blocks from the main square and its extensively recognizable by its indigo blue color, which has been preserved by its succeeding owners.  It was declared national heritage in 1963.

The tourists interested in visiting can do it freely, since the center of the large house is open for the public and there are tourist guides ready to relate the history and importance of the events that developed in their walkways.