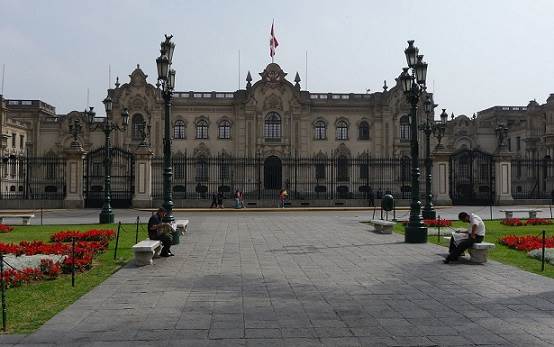 Born as the City of the Kings, the current capital of Peru was not only the center of the Spanish administration in America for more than 300 years, but it was also an oasis of European culture inside the New World.  Capital of a great empire that was born in Nicaragua and finished in the Strait of Magellan, iit was the headquarters and promoter of an architectural and religious cultural development imitated by the remainder cities founded by the Spaniards in American lands.

The history of Lima begins in its foundation in 1535, under the command of Francisco Pizarro, leader of the conquest of the Empire of the Inca.  After the division of the city in sections, the beginning of constructions of the social institutions and the civil war among the conquerors, arrived the first Virrey of the colony:  Blasco Núñez de Vela.

The Virrey was the representative of the king of Spain and he was chosen among the nobility.  He entered Lima with all the honors and he established policies that his followers would continue for 300 years.

The importance of the Virrey in Lima

In the old House of Pizarro, at present called Palace of Government, was the dwelling of the Virrey for the time of his stay as the leader of the Colony, which should not exceed 4 years.  This was found in the main square, which was decorated every year according to the social and religious festivities that were celebrated in Spain. With the stable presence of the virrey, the adjoining sectors to the main square became the most important social center of the capital.  Because of it, the nobility native lived in the closest sector to the Plaza, doing gala of their wealth adorning their houses with fine engraved stone details and promoting the construction of wood balconies that gave view to the street.

What does the Virrey do?

As we had said before, the Virrey was the representative of the king of Spain in the colony.  He had five main responsibilities: political, military, judicial, economic and religious.  In the first years of the Colony, there was a virrey in Mexico and another in Lima.  After the Bourbon Reforms of the 18th century, the extensive viceroyalty of Peru was subdivided in two more divisions, being added the political power to the virrey of new Granada – current Colombia, Venezuela, Ecuador and Panama – and of Rio de Plata – current Argentina, Uruguay and Paraguay -.

Inside the colonial administration system, an promotion was considered if a virrey was elevated of its position to Virrey of Peru.

The Colonial Lima and its relationship with Peru

Being its capital, Lima was one of the political divisions of the extensive viceroyalty of Peru.  It was divided into small towns since 1550, that were the gem of the current political division of the country.  From it departed the legislations towards the other small towns and the administration of natural and economic resources.

Furthermore, Lima was the highest seat of the Real Audience, the court of virreinal justice, whose jurisdiction covered all the other viceroyalties as last instance in case some legal dispute.  Because of it, in view of their importance, it was the first city elected by the king of Spain to be the headquarters of the first university of America:  la Universidad Nacional de San Marcos, from where delegations of American intellectuals  left to found similar capitals in the remainder of the Spanish kingdoms of the New World.