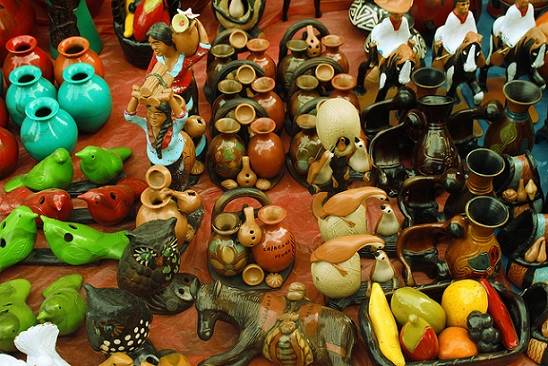 Peruvian ceramics have become an important part of the Peruvian’s national history because of it’s value, its aesthetic worth, and the techniques used to craft the pieces.  Dating back to the times of the Mochica civilization, these northerners (the Moche civilization flourished in northern Peru between 100 and 800 B.C.) considered themselves specialists in the finishing detail work of the pottery, with specific emphasis on the painting styles and shapes of the pieces.

The town of Chulucanas is known for this style of unique pottery making. The town is located  46 kilometers (28.5 miles) southeast of Piura, where approximately 500 families live and dedicate their time to a fusion of the crafting techniques of their ancestors  with the requirements and styles of modern day to create a totally new, charming and innovative approach to the way these pieces are made.  In this  way, it has become a revered product of Peruvian national pride.

In Chulucanas, the artisans offer a very diverse selection of ceramic hand crafted objects, which have been divided into four different types: positive, negative, smoked (negrado) and polychromatic (having various colors). The difference between each, is in the manner in which each one is fired up and the amount of time it spends in the kiln, as well as the skill and talent with which the particular artisan handles, paints and decorates the piece. Within the region, in the village of Simbila- which is located five minutes away from Chulucanas- they still use the technique of the “paleteo.” With this technique, the finished piece comes out with a brighter sheen and better definition.  It’s a technique that has been passed on through the generations, from fathers down to their children, for many centuries. The origins of this style came from the Vicus Culture, which had been heavily influenced by the Mochica and Chimu in the time period before the Incan Empire.

A separate heading is needed just to be able to describe the artistic motives, the meaning, that is applied to the ceramics. Once the ceramic has been taken out of the kiln, a liquid clay is applied to cover the areas where the natural color is to be kept. The areas that are to be darkened are left as is and then the piece is put into the kiln for a second time, with the fire built up by the ashes produced by mango leaves, which produce a kind of resin that’ll be added to the pieces to give it their characteristic fine sheen. The process can be repeated a number of times depending on the color you’d want to obtain.

Due to its popularity which has managed to conquer with great success the demanding markets of the United States and Europe, they are no longer of common use in the local areas, but are now mainly an exported item. To make them more useful objects, a glass interior has been applied to them, so that they can be used to store liquids. Nowadays they can have an ever-day use or a purely decorative one.