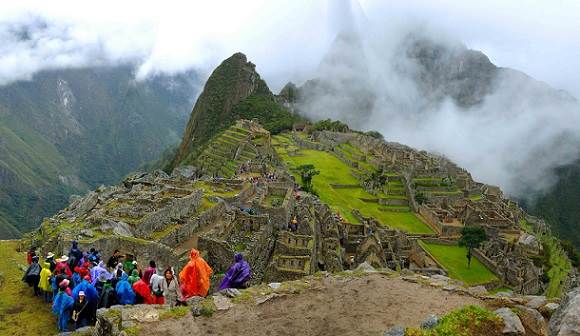 Contrary to the the official history, Augustine Lizárraga, a land owner of Cuzco, was the first one that arrived to Machu Picchu on July 14, 1902, with three explorers of Cuzco, who had left graffiti with their names on the walls of the Temple of the Three Windows.

Nevertheless, the North American Hiram Bingham was considered the discoverer of the “loss city of the Inca”.  Bingham was in Cuzco studying the era of the Inca of Vilcabamba when he heard talks of the discovery of Lizárraga and arrived at the fortress on June 24, 1911.  In it, he found two families of peasants living there, who utilized the old railway platforms to cultivate.  Bingham was guided by one of the children of the families to the urban zone, that was covered by the forest.

Surprised by what he saw, Bingham negotiated a patronage from Yale University, the Peruvian government and the National Geographic Society for the study of the ruins, where he dedicated to analyze its history and all the relics found in the abandoned temples.  In 1913 an article was published on Machu Picchu in the magazine National Geographic, hoarding the attention of the world scientific community.

The importance of the discovery

It fits to emphasize, once more, that Machu Picchu was never itself “lost”, but was outside of the sphere of influence of the Crown of Spain during the Virreynato of Peru.  Hiram Bingham was a key player in its enhancement on a worldwide basis, since he was the first person in recognizing the importance of its ruins, study them and divulge the finds to the scientific community. In spite of the existing controversy between the Peruvian State and Yale University for the possession of more than 45 thousand artifacts extracted by the team of Bingham for their study and that have not been returned to the Peruvian treasury, Peru owes a lot to this University who promoted the study of the same and the creation of expositions in the most important museums.  Machu Picchu, then, is the jewel of the ruins of what was the Inca Empire by their state of conservation, which was worth to be considered as one of the 7 New Wonders of the World.