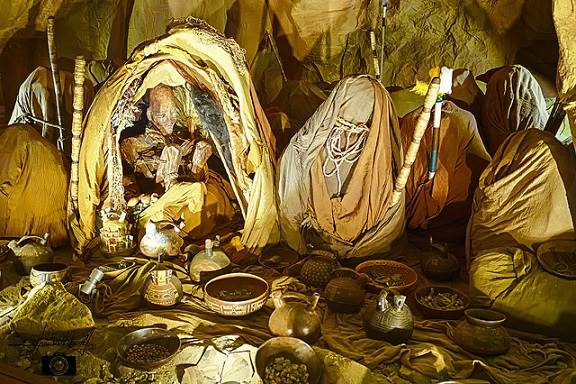 A few hours from Lima, near Pisco Bay, the famous Peruvian archeologist Julio C. Tello discovered some funereal bundles and exquisite textiles that belonged to an, until then, undiscovered culture.  They found that even though thousands of years had passed, the texture of the cloths had not deteriorated much, which is why he decided to study them.

These cloths are the vestiges of what was the Paracas Culture, a group of sovereignties that lived in these lands until 300 A.D. and who had a special cult of the dead, dividing its histories in two epochs:   Paracas Caverns and  Paracas Necropolis.

What is a funereal bundle?

The Paracas believed that the soul of the deceased  did not leave this world without its earthly objects.  Therefore, at the moment of internment, they would place the body in a wicker basket in the fetal position and they would place, near its reach, some objects as an offering to the gods.

The funereal bundle is a type of capsule where the deceased was placed in order to initiate its voyage to the other world.  They were covered by a hand-made cloth of fine design that would reach up to 20 meters in length.  Later this shawl would be covered by others that were smaller and with less detail which were vestments to protect the main shawl.

The deceased would show up with a cotton turban dyed red and adorned with gold pieces like necklaces and bracelets.  Likewise, at its side was a funereal trousseau that consisted of a fan made of feathers, a club made of stone, knives, knitting utensils and a brass plate with food for its consumption and as an offering to the gods. In this first stage of the Paracas culture, the mummies were placed in excavated tombs on the floor in flagons in the shape of caverns.  Inside were many funereal bundles and were covered in stones to avoid its rapid decomposition.

With the passage of time, the Paracas evolved and the cult of the dead changed.  Instead of digging deep tunnels on the floor, they created the first cemeteries in America:   Wari Kayan and Cabeza Larga, in which archeologists were able to distinguish many elements of a complex culture.

In them they were able to see that the mummies were grouped according to the quality of their bundles, which indicated the presence of social categories.  Likewise, the poorest bundles contained incinerated bodies, leading us to believe that the process was something very special and brought with it an economic cost to the family.  On the other hand, some mummies had passed through the process of artificial mummification through exposure to the elements, taking advantage of the region’s dry climate that favors this process.  Paracas:  travelers from life to death.