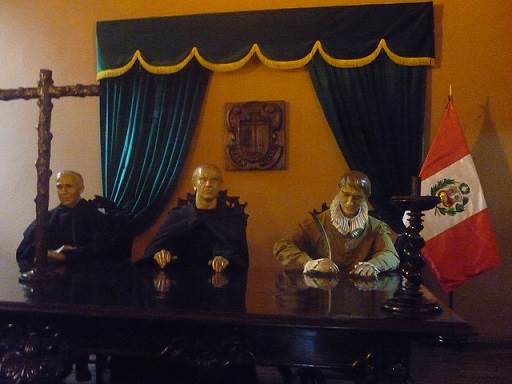 Lima, as the capital of the Spanish Kingdom in America, had a great influence on behalf of the Spaniards to be converted into a piece of Europe in the New World.  That is why, while barely founded as a city, they dedicated themselves to import social institutions and put them to their proper functions.
One of these was the Sainted Inquisition, created in Lima by King Phillip II in the year 1569 and lasted until 1820. It was the tribunal in defense of the Catholic faith from the influences of the beliefs of the Incas and in its 200 years it sentenced 1474 people to death.  The most common charge was the crime of Heresy.

Heresy in Peru was seen by the church as an attack on public order and was utilized as arm of domination to subjugate the natives in their weakest area:  religious belief.

The museum of the Santa Inquisición was created in 1968 and has, as its main function, the broadcast of the cultural history of our viceregal past.  Within it there exists the Room of Audiences, Auto De Fe Processes, Secret Cells and Torture Chambers, where the accused who had fallen into contradiction were tortured or where those who refused to declare themselves were processed.  This procedure was supervised by a priest and a physician, who protected the patient’s life in order to prolong it as much as necessary. The museum currently receives more than 200 thousand tourists from all over the world due to the social importance that it has in understanding the Peruvian past, which has always been very much tied up to the interests of the Catholic church.

Even though in the last years of the Inquisition, it was used to torture patriots, it still serves to understand the other side of the history of the Spanish conquest.