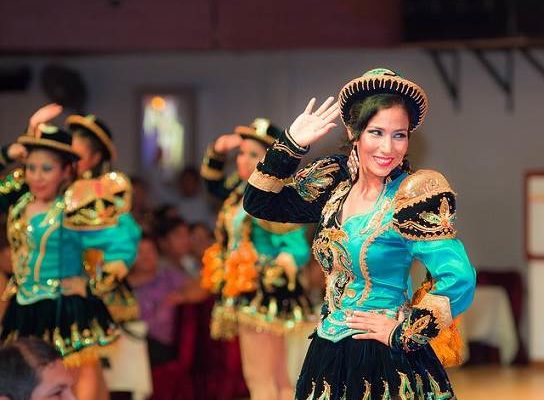 Through its traditions, we can learn the identity of a country. Due to the diversity of people living in the country, cultivating their own customs, Peru also offers a wide array of dances, music and gastronomy, which it shares with the world through institutions charged with disseminating them.

Among those institutions the Asociación Cultural Brisas del Titicaca (a cultural association), has a special place. Created as a musical group at the end of 1962, it has almost 47 years of experience in creating shows that allow the public to admire pieces of Peruvian art at its location of the same name, located at 168 Pasaje Wakulski – Cercado de Lima, one block from the Bolognesi square.

The show
With its slogan “the best of the Peruvian folklore under the sky of Lima,” the Brisas del Titicaca has a cast of musicians, singers and dancers from its school. On Thursdays, Fridays and Saturdays of each week members of invited associations join them to offer the best of their art in touristic shows without precedent.

Each visitor sits at a table where, in addition to comfortable enjoy the show, he or she can sample the most delicious national appetizers, like Pisco Sour, Algarrobina cocktail, and Chicha de Jora. The show, which begins at 8:30 p.m. and lasts approximately five hours, combines the dances from the various provinces of the country. Some of the most celebrated are the Afro-Peruvian dances, like the Festejo, the Landó and the Ingá, with origins in the south of Lima and Ica, and are performed with the popular Peruvian cajón (a musical instrument).

We also find dances representative of the sierra, like the Huaylash and the Tuntuna. The former is from the region of Junin and calls attention by its performers’ quick shoe movements, in addition to the colorful skirts and covers which are part of the females’ outfit.

The Tuntuna or dance of the Caporales, on the other hand, has its origins in the Peruvian-Bolivian highlands, and its name comes from the drum’s “tun-tun” that guide the male and female dancers, who wear eye-catching costumes of short-winged hats and puffed sleeves.

Without a doubt, one of the most requested pieces is the execution of the Marinera Norteña, the most notable Peruvian dance. Native from the north of the country, and so called in honor of the war naval force and its hero Miguel Grau, it represents the courting of the man towards the woman, by which both seduce each other with jauntiness and flirt.

The reservation
The cost of the dinner-show at the folk club “Brisas del Titicaca” is thirty dollars per person at the preferential location (second row), and thirty five dollars per person on the V.I.P. area (front row). Reservations can be made on their web page* or by hiring the services of a travel agency such as Prusia Tours, which also includes round-trip transportation from and to the hotel once the show is over.