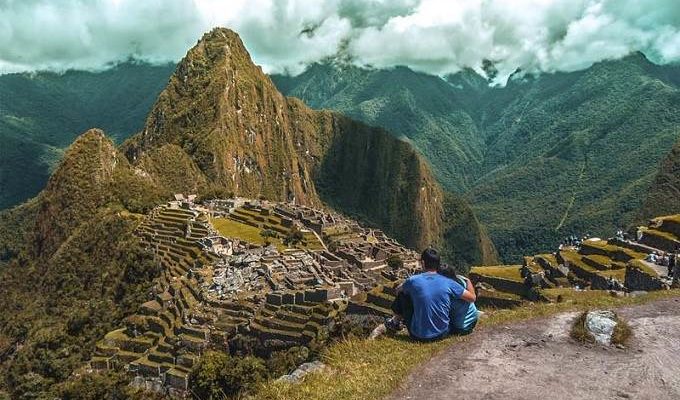 Today Armando picked us up at 9:00 to take us to Ollantaytambo. We first headed to the Cusco market, which is quite large on Saturdays. After walking through all the stalls, we went to a place where we could buy school supplies for a local village that Llama Expeditions supports. After picking up dozens of notebooks, pens, pencils, crayons, glue and such, we headed off to the Sacred Valley.

The valley is no more that 1 – 2 KM wide, but it’s 275 KM long and it is incredibly beautiful – surrounded by towering mountain peaks with the Urubamba river running right through it. The soil is so fertile and the weather is so perfect for growing crops, that they are able to have 3 harvests per year.

Our guide told us that they have about 4,000 varieties of potatoes and 200 varieties of corn. They have one type of corn where the kernels are so huge that when you make popcorn from it, each kernel of popcorn is the size of a ping pong ball. We actually bought some in the morning at the market.

Once in the valley, we stopped at Awana Kancha where we could see the 3 species of llamas and 3 species of alpacas. These animals are relatives of the camel. They have a fairly large store where you can buy all sorts of woven garments, tapestries and other souvenirs made from alpaca. The wool from the baby alpacas is particularly valued because of its fine texture and soft feel to the touch.

By 1:00, we were in the village of Chaywatiri, which has about 600 inhabitants. They have about 100 children in the village, and of course, they don’t have enough materials for their school. They support themselves through weaving and agriculture.

Before handing out the school supplies, the children all sat in a row (about 40 of them were there on this particular day – about 12 teenagers and the rest from 2 years to about 10 years old).

Before sitting down to lunch, I peeked into their kitchen just to see what it looked like. Cooking is definitely a communal affair with several people tending to it.

After the soup, they brought plates of shredded potatoes, rice and roasted guinea pig. I think Eileen and I were the only ones who didn’t try the guinea pig, although everyone said it tasted like chicken. Personally speaking, I wasn’t into eating rodents (we saw live ones in one of their kitchens)> So, I decided to be a vegetarian for lunch!

After lunch, all the kids sat politely in rows while we handed out the school supplies. They were really excited to get them and it was fun to see them trade some of the notebooks, because some of the boys didn’t want notebooks with female characters on the covers and vice versa.

After that, we looked at what they had for sale from their woven wares and bought a few things.

Upon leaving Chaywatiri, we were struck by the peace and quiet of the region. We saw farmers harvesting their potatoes, cattle grazing by the side of the road, terraced hillsides, tidy homes and people of all ages carrying large sacks of produce on their backs.

We then continued on our way to Ollantaytambo and went to a local bar where they served chicha, a low alcohol (3%) beer made from one of their 4,000 varieties of corn.

We reached the hotel Pakaritampu by 6:00. It was ideally situated only 2 blocks from the train station where we took the train to Machu Picchu the following day. The hotel had multiple buildings and was filled with flower gardens. It actually looks a little like a hunting lodge – very pretty with a babbling brook that runs alongside it. In the morning, llamas were roaming around the garden nibbling at the grass.

Ollantaytambo is 2,000 feet lower than Cusco, only about 9,000 feet above sea level. So, we definitely felt like we were able to breathe a bit easier here. Michael’s nails turned a grey blue color our first night in Cusco, which was an obvious sign that he was short of oxygen. Mine were just a tad grey, but they pinked up the next day. Machu Picchu is 1,000 feet lower than Ollantaytamo so by the time we got to Machu Pichhu, we had no problems with our hikes.

There are two schools of thought as to how to organize this type of trip to minimize the effect of the altitude. Some travelers advised us to fly to Cusco and head directly to Machu Picchu and ease ourselves into the high altitudes (Machu Picchu is at 8,000 ft; Sacred Valley is 9,200 ft; Cusco at 11,200 ft, and Lake Titicaca at 12,500 ft.) However, you face a really long travel day to Machu Picchu since the flight from Lima is about 90 minutes to which you have to add a 90 minute drive to Ollantaytambo and another 2 hour train ride to Machu Picchu followed by a 25 minute bus ride if you are staying at the Sanctuary Lodge at Macchu Picchu. It’s a full day of traveling and I don’t think we would have handled our hike up Waynapicchu as easily as we did had we not spent a few days in the high altitudes prior to the hike.

After settling into our rooms at the Pakaritampu hotel, we found a place for dinner – about a 5 minute walk from the hotel – called Orisha’s. The service was ridiculously slow and the food was average. Not worth it. We should have eaten at the hotel.