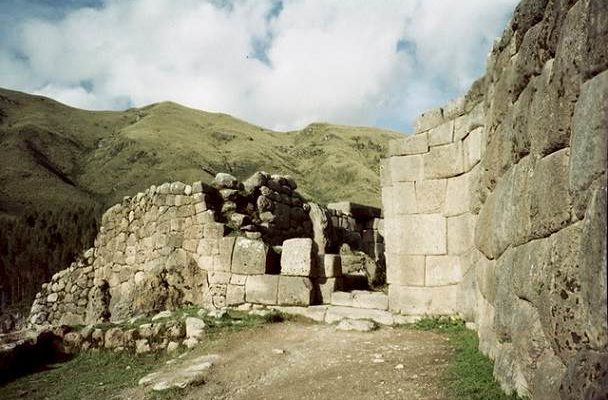 Armando picked us up at 9:00 from our hotel. Our first stop was at Sacsayhuaman – an archeological site that means “head of the Puma” – a site where the Incas undoubtedly worshipped the sun. This strategic location, perched high atop the hills overlooking Cusco, was significant from a military and religious standpoint. The high ground certainly had to benefit the Incas during conflicts, even prior to arrival of the Spanish Conquistadors.

Contained within the site was also a large plateau where large ceremonies could take place. In fact, during Incan times, young men of 18 to 20 years old would participate in Olympic style games.

The walls of these imposing structures were made of stone and boulders brought down from quarries several miles away. The biggest one was 126 tons. The only explanation we have for how the Incas moved the boulders from the quarries to these ancient sites was by using rolling logs, much like the Egyptians did with the pyramids. However, the terrain is so hilly that even this explanation is unsatisfactory.

If a boulder came loose from its ropes on a downhill, it could easily shatter. And, the other mystery is how did they get the boulders across the river? Finally, each stone was assembled like a perfect jigsaw puzzle without the use of any mortar – another mystery since they would have required cutting tools of exquisite precision.

One of the stories recounted by Armando was one of “human sacrifice.” Whenever a physical phenomenon would occur, such as a volcanic eruption, an earthquake, or a particularly violent storm, the Incas felt a sacrifice was necessary.

The Inca and pre-Inca people used to prepare children for sacrifice starting from the age of 4 or 5 and by the time they were about 10, they would be ready for sacrifice when the need arose. They would hike high up into the mountains – up to 6,000 meters, where it was very cold and snowy, and would give fermented corn syrup (“chicha”) to the children so they’d become drunk and unconscious.

Then, the children would be hit over the head with a club and buried in their unconscious state. Their bodies would freeze in the low temperatures of the high mountain altitudes. In modern times, they found these bodies perfectly intact with the frozen alcohol in their stomach.

CT scans showed precisely how they were killed – by being clubbed. Of course, this sounds like incredibly cruel treatment. That said, whenever a significant event occurred, the Incas felt the need to quell the wrath of their deities by offering up a human sacrifice.

Q’enko is another archeological site that we visited. In Quechua, it means “labyrinth.” This is the place where nobles and royalty were mummified. Regular people had simple burials. The mummification process took about one month. People were all buried in the fetal position facing east (direction of the rising sun) because they believed in reincarnation. During the mummification process, they cut the tendons and muscles so the body could be properly arranged.

After visiting Q’enko, we were off to Tambo Machay, the Inca Baths. These are natural springs where the nobles would come from Cusco to bathe.

We then stopped to admire the view from Puca Pucara – the watch tower where the Incas guarded their town from marauders.

After visiting the archeological sites, we went back to Cusco to have lunch at Pucara, a simple Peruvian restaurant where everyone enjoyed their meals.

The next stop was the Textile Museum where we saw some of the finest weaving examples available. Of course, there were many wonderful bags, shawls and other woven works for sale. We were told that the prices here were on the high side and to wait for other opportunities. That said, after seeing all the woven goods available for sale in many other places, I felt that these were of really fine quality and worth the few extra dollars.

Our next stop was a visit to the Coricancha, Temple of the Sun, where the juxtaposition between the Inca and Spanish styles was quite startling. Armando explained that while construction of the temple began around 1200 A.D., the temple went through a major remodel under the reign of Pachacuti in the mid 1400’s. Gold plates were added to the floors and walls. They had life-size gold and silver statues of the gods in their individual sanctuaries and a large golden sun was the focal point of the temple.

When the conquistadores prevailed over the Incas, they stripped the temple bare of all its precious metals and melted them down into ingots to ship back to Spain. The Spanish then constructed a church and convent on the site of the temple.

Earthquakes destroyed significant parts of the church and exposed walls of the original Inca structure. These survived despite the earthquakes because of the superior Inca construction. It is also interesting to see much of the Inca symbolism is embedded in the construction of the church, like this portal depicting the sun over the doorway.