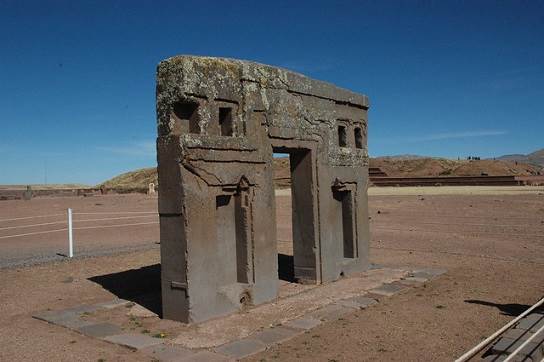 I was awakened at 6:20 when the person at the hotel front desk called to let me know that Michael was sitting outside the door. The doors lock from the inside. Since they didn’t have another key, the desk clerk woke me up to let him in.

He was totally exhausted and still feeling drugged from the Ambien he took soon after takeoff.  In addition, he had caught a cold just prior to his departure from New York.  He took off his shoes, socks, and pants and flopped into bed.

While Jean, Joe, and I met for breakfast in the dining room, we let Michael sleep. We thought that he would stay at the hotel and relax that day while we went to Tiwanaku. At 8:40, the sound of the door being unlocked woke Michael up. When I suggested he stay in bed and just relax, he would have none of that. He was ready in 15 minutes and met us downstairs at 9:05. Our cab driver, Fabio, was already waiting for us.

There was a big demonstration of students marching right past our hotel, which caused a terrible traffic jam. It took us about 15 minutes just to go around the corner and head north back up and over the mountain towards Tiwanaku. The drive was incredibly interesting. It took us through towns jammed with people selling all sorts of paraphernalia. Almost all of the women were wearing indigenous clothing.

Dogs roamed freely all over the streets. We even saw one pick off the entrails of some dead animal. Apparently, most people living out of the city own dogs for protection. However, during the day, they let them out only to have them return home each evening.

Once we cleared the towns with the street hawkers and crowds of people milling about, we continued on into open country. The views were spectacular with the Andes Mountains surrounding us to the east, south, and west.

Tiwanaku is only 18 kilometers from the lake. And, the drive from the ruins to the border with Peru is a short 30 minutes. At one time, Tiwanaku was only a kilometer from the lake. However, over the past millennium, the lake has receded significantly. All kinds of artifacts and antiquities have been found as the lake has been making its retreat.

As is typical in this part of the world, there are many half finished urbanization projects that dot the landscape. People start building homes and once they run out of money, they have to stop until they accumulate more. Consequently, the region is strewn with these half finished projects, which might take years to complete due to lack of funds.

We hired an English speaking guide, a young man from the area who was a student at the University of La Paz. His English was fairly good and he was able to give us very detailed explanations of the ruins, which were only discovered some 30 years ago. There is still MUCH more to excavate and it will take years to uncover what weather and civilizations have covered.

There is evidence that the Tiwanaku civilization lasted from 300 AD to 1000 AD. Unlike the Incas, who came to the area some 400 years later and were a warrior people, the Tiwanaku were pacifists. That said, that didn’t stop them from making human sacrifices of young girls as an offering to the God of fertility. Of course, many other people were sacrificed as well. And, skeletal evidence shows that many of them were foreigners, not from the Tiwanaku tribes.

Geographically, the Tiwanaku people inhabited the northern part of Chile, the southern part of Peru bordering the coast and Lake Titicaca, and the northern part of Bolivia on the other side of the lake. They farmed, raised domesticated animals, and had a highly organized social structure. Rituals were extremely important to them and celebrations were frequent during the various equinoxes.

Their precision in construction is a marvel. Stones are cut so smoothly, that it’s a wonder how they did it without modern tools.

Another marvel is their Sun Gate, which was positioned in just the right spot so that the sun would shine right through it without making any shadows at the vernal equinox. Unfortunately, the Sun Gate was moved to another spot during colonial times and is no longer in its original place. Now that the area has been designated a UNESCO World Heritage site, they can’t move it back to where it belongs.

After touring the site and visiting the stone museum with an 8 meter tall statue of Pachamama, we visited the ceramic museum and saw some very beautiful artifacts that gave evidence to their aesthetic sensibilities.

By 2:00, we were all hungry and ready for a hearty lunch. So, our cab driver followed Carlos, our guide, who led us to the hotel Tiawanaku on his bike. For $6 a person, we had salad, a delicious quinoa soup, trout with vegetables, and a pineapple mousse for dessert. Bolivia is incredibly inexpensive and things cost a whole lot less than they did in the six other South American countries we’ve been to.

By 2:45, we headed back to La Paz.  It took a full two hours because the traffic was terrible as we approached the city. In addition, people were getting off work. So, there were huge throngs of people milling about, heading to the food stalls or home to cook.

We arrived at the hotel by 4:45. So, we were able to rest before going to dinner.

By 6:00, we met up with Diane, the owner of Llama Expeditions, who had arrived from Cusco.  Since this was her inaugural itinerary to La Paz, the Salt Flats, and the Bolivian highlands, she accompanied us on the entire trip.

Pedro picked us up at 7:00 to take us to a very nice restaurant, Pan de Oro, where we were treated to a wonderful Bolivian show. The restaurant was located in another one of these hotels that used to be a private home, just like La Casona.

We ate well and were well entertained. That said, we were anxious to return to our hotel because we had to wake up at 3:00 AM so we could take our 5:40 flight to Uyuni.