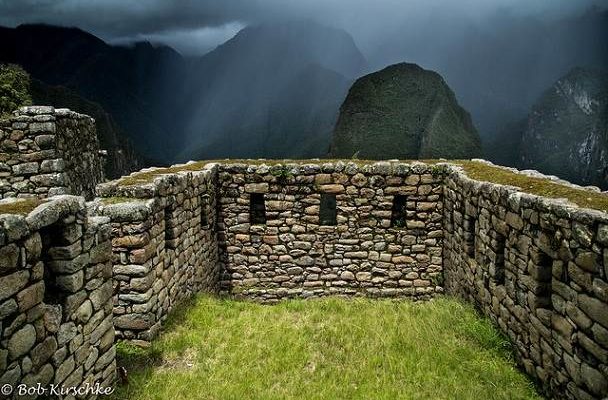 We woke up really early to take the 8:00 train to Machu Picchu. After settling into our assigned seats, the train took off promptly at 8:00. This was one of the most beautiful train rides we ever took.

The train passed through towering snowcapped mountains, while the Urubamba River glistened and flowed alongside the train tracks tumbling over rounded boulders and rocks with occasional rapids here and there. We were so absorbed by the landscape that we barely felt the time pass.

Upon exiting the train station, we were met by our guide, Liset. Liset is from Aguas Calientes, but went to school in Cusco. She was incredibly knowledgeable about the history of Machu Picchu and was obviously very proud of her heritage.

We took a short walk to the bus station for the ride to Machu Picchu. Our bus struggled to make its way up another 1000 feet to Machu Picchu, lurching from one switchback to another. Within 25 minutes, we arrived at our destination, the Sanctuary Lodge. Since it was only 10:15 when we arrived, the hotel staff led us to a day room where we could store our luggage and take the few items we really needed for our hike, such as sunglasses, suntan lotion, hats, bottled water, and of course, our cameras.

To enter Machu Picchu, you need to show your passport and entry ticket. Once inside, we had our passports stamped with the Machu Picchu logo and the date.

By 11:00, the park was filled with tourists. So, Liset tried to find areas of relative quiet where she could relay the incredible history of the Inca Empire during the 100 year period from 1431 when it reached its height to 1531 when the conquistadores all but obliterated this rich and varied culture. When we laid eyes on the ruins of Machu Picchu, set between towering mountains, it nearly took our breath away. In Quechua, Machu Picchu means high or old mountain. Behind the ruins lies Wayna Picchu, the mountain we would climb the next morning, which means young mountain.

As we meandered through the urban area with houses, ceremonial plazas, and the sacred rock, we learned about the astronomical prowess of the Incas. We couldn’t help but marvel over this very advanced civilization – a civilization that understood the interaction between the moon, the stars, and the heavens and one that understood how to make the most out of the terraced hillsides creating microclimates all along the sides of mountains.

While remnants of this brilliant civilization still remain today, such as spoken Quechua, the worship of nature, and the recognition that we owe our sustenance to the bounties and richness of the earth, it seems relegated to the provincial areas throughout the Andes. In contrast, Inca descendants face undue prejudices in the cities like Lima.  Liset was a fountain of information and talked about Machu Picchu for three straight hours. Her passion and love for the subject was as undeniable as it was infectious.

After our tour, we headed back to the Sanctuary Lodge for a late lunch. It’s an all inclusive resort that allowed us to enjoy the magic of Machu Picchu in the peace and quiet of the late afternoon when most of the tourists had taken their buses back to Aguas Calientes.

As we contemplated the history and courage of civilizations past, we gazed over Wayna Picchu as it lorded over the town below, trying to understand how the Incas accomplished some of their engineering marvels like moving huge boulders cut perfectly like jigsaw puzzles over mountains and valleys some 20 kilometers away from their quarries only to reassemble them with extraordinary precision, architectural perfection, that would be difficult to achieve even today with our modern tools and technology.