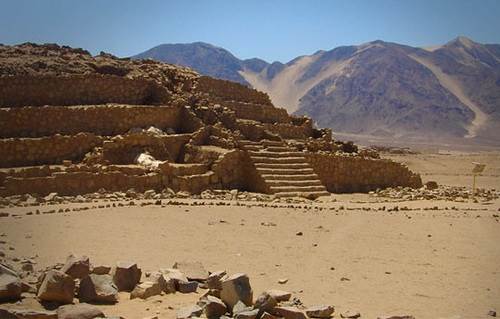 With it’s ever-growing skyscrapers, recent epicurean stardom and booming economy, Peru has made a name for itself on the world-wide stage. Each year, curious travelers come by the millions to the Andean nation to sip pisco sours and conquer Machu Picchu. But what they may not know is that less than three hours outside of Lima, one of the Americas’ busiest, most populated capitals, is also one of the Americas’ oldest urban centers that rivals the ancient civilizations of Mesopotamia and Egypt in both its complexity and age.

Caral, believed to have first been settled 5,000 years ago (more than 3,500 years before the Incas who have made Peru famous), sits on 200 acres of sand blown in from the coast 15 miles west. Below the bright blue sky, intricately erected pyramids, temples, plazas, and homes dot the scenery.

While Peruvian archaeologist Ruth Shady discovered the site in 1994, it wasn’t until the southern hemisphere’s spring of 2013 that I came across it. After a 120-mile drive which included a half-hour journey down a bumpy gravel road where we dodged street dogs and pot holes, my three friends and I arrived to the sun-drenched Caral, a UNESCO World Heritage Site. We purchased our entrance tickets and then met up with a group of twenty other tourists, who for S./1 (US$0.35) each could hire a guide for a semi-private tour.

After walking through the recently constructed visitors’ center complete with flushing toilets, gift shops, and a cafeteria, we spotted what was once a booming civilization. Our guide brought the city to life, explaining that while the concepts of metal weaponry and writing were not part of the society, archaeologists have found other keys that point to just how sophisticated the society once was.

Musicians made wind instruments out of pelican, condor, llama, and alpaca bones and likely played them in the city’s amphitheater. The idea of trading with coastal inhabitants for seafood was also part of society.

And, farmers built irrigation canals that branched off of the Supe River to nourish their pumpkin, sweet potatoes, corn, chili peppers, and cotton crops.

Archaeologists and researchers have spent the last 20 years painstakingly excavating this city and have only revealed a small portion of the treasures that lie beneath 50 centuries of sand and debris. They all admit there is a lot they still don’t know. What they do know is that that they will continue to dig, because each artifact they uncover is a key linking Peru’s past with the Americas’ present. You see, Caral is one of at least 18 other settlements in the fertile Supe River valley. Each one holds a set of mysteries waiting to be discovered; and story waiting to be told.