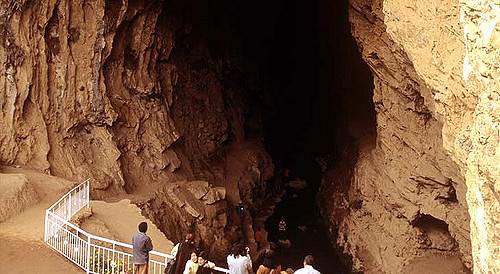 Located 31 kilometers from Tarma , in the department of Junin, we find what is considered to be the deepest cave in South America. The cave of Guagapo, whose name in Quechua means “Tears of the All-Powerful”, is a rocky formation 2,000 meteres deep of which the opening to the outside is 20 meters high. Inside are stalactites and stalacmites, forming a small drizzle that falls over the heads of tourists who venture into this natural wonder.

Within the walls of the cave, we find not only thousand year-old rock formations, but also proof of the existence of a community which once lived inside, since we can see the cave paintings representing typical animals of the region: the llama, the guanaco, the snake, and some hunting scenes as well.

When we enter into the interior, we will be able to see a subterranean stream that, upon emerging from the rock, forms small cascades toward a moor covered by natural vegetation that lives on the water from the stream. After a 100 meters of walking, the path separates from the stream and from this point on, you need a tourist guide to tell you where to walk. The cave is divided into two sections and the adventure begins as we climb a bit in order to continue our hike in search of the “tears of the all-powerful”. After ascending this stretch and walking approximately 300 meters into the interior of the cave, we arrive on dry ground and can see the stalactite and stalacmite formations on the roof, which with drops of water have formed an entire forest of rock for us to admire.

Why is it called “The Tears of the All-Powerful”?

There is a legend that the villagers tell as to why this name was given to this place. In the time of the Incan expansion, the local people knew that in this cave there were caverns which could serve as a refuge to them should there be an invasion. So, when the armies of Incan warriors arrived, the men from the village hid their wives and children here in order to save them from a possible massacre.

The families waited for the return of the warriors for a long time, but the Incas were too strong and the men never returned. The women mourned their deaths and, out of fear, never left the cave, becoming transformed into rock after many years.

So if today we are in this place, and close our eyes, we will be able to hear their cries in the drops of water.