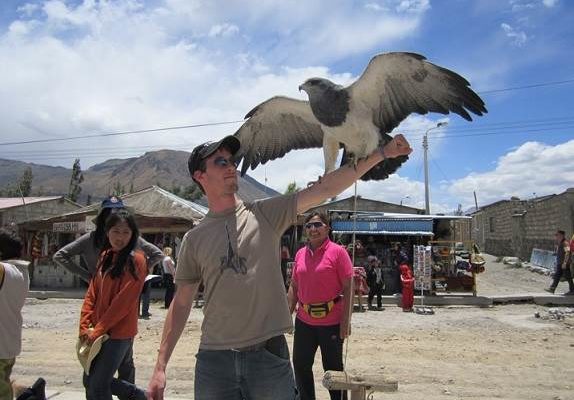 I rubbed the sleep from my eyes and tried to shake away the numbness from my limbs.  Only the occasional car – passing outside – broke the silence that otherwise hung like a heavy blanket over a slumbering city.  Overhead, a single bulb cast stark shadows in lonely lobby.

It was 3 in the morning and Ellen and I waited for our bus.  Not with patience mind you nor with impatience.  It was too early in the morning for any emotion.  In the fog of our half asleep minds we were just waiting…

Eventually the sound of the bus alerted us to our approaching adventure.  While it would still be another three more hours before the surrounding mountains gave way to sweeping canyons, we settled comfortably in our seats, knowing that we were on our way…

Only months before, in preparation for our upcoming trip, I had been researching possible activities for our time in Arequipa.  It was during those long hours that I came across the first glimpse of what would later be the highlight of our trip – second only to the glorious site of Machu Picchu.  Colca Canyon and Cotahuasi Canyon – each twice as deep as America’s famed Grand Canyon — were hidden like gems in this breath taking and untamed region in southern Peru where Lake Titicaca gets most of the attention.

Colca Canyon, the target of our tour that day, was over 11,000 ft ( over 3400 m) deep and is known for its beautiful terraces and gliding condors.  Cotahuasi – at a depth of over 11,500 ft (over 3500 m) is reportedly the deepest canyon in the world.  With so much to see in this region, I was amazed that I had not once caught a glimpse of this well kept secret in travel magazines or travel sites. How to Make it Happen
Arequipa, the beautiful colonial city of Southern Peru and one of the three largest cities in the country, is the ideal vantage point from which to take a tour to Colca Canyon.  Along the western side of the main square a number of tour companies vie for your attention.  The majority of them offer day trips to the canyon.

It’s necessary to set off extremely early in the morning, but the experience makes it more than worth it.  Doing so allows one to reach Cruz del Condor in time to see the condors, which take advantage of the morning thermals as they warm up for their day.

On your trip, make sure to bring sun block and water.  A pair of binoculars is a good idea if you have them.  Make sure to bring a swim suit too.  Many of the tour companies stop on the way back to give customers an opportunity to unwind in the iron and sulphur rich waters of the town of La Calera.

Although Colca Canyon is a geographic marvel for its extreme depth and its famed Condors, we still do not think it surpasses the beauty of the Grand Canyon. Indeed, it may be deeper, but it is certainly not grander.

Have you ever been to the Grand Canyon and/or Colca Canyon? What was your experience like, and which left a greater impression on you?