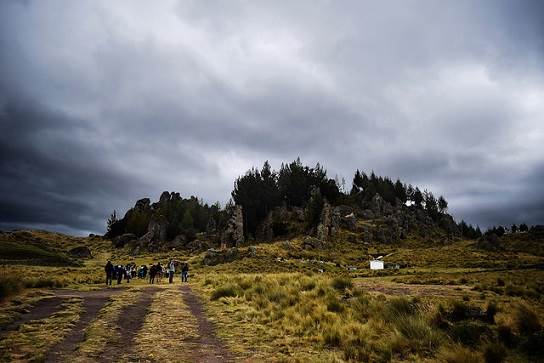 In order to survive and spread their culture , the men and women of northern Peru have been characterized throughout history as a group of people that were consistently overcoming northern Peru’s harsh terrain. Located a few kilometers from Cajamarca , Cumbemayo is a fine example of the peoples’ ability to triumph over the hostile environment.

The Cumbemayo Ruins are located at the base of Cumbe Hill.  There, the people of Cajamarca had built aqueducts carved into rock and decorated with various glyphs.  The aqueducts brought water from the hill’s melting snow thus supplying a population with adequate water. These aqueducts were built around 1500 BC and are considered one of the oldest manmade structures in South America.

How Were They Built?

The ancient people of this region had noted that rainfall was scarce. In turn, they needed to seek new ways to supply water to their livestock and families. Their solution came in the form of volcanic rock shaped into a zigzag pattern and placed around the hill.  This structure guided the water from the melting snows from the hilltops to the people down below. Within this structure, the ancients built a religious shrine. There, priests worshiped a stone sculpture in the form of a human head that leads into a cave filled with still undeciphered glyphs . Additionally, shrines were erected at every major section of the aqueduct as offerings to the gods.
Cumbemayo is an esoteric region that tourists can enjoy. Given the history of the aqueducts, the nature encompassing them, and the engineering of volcanic rock, drinking this water – rich in minerals – gives the body not just a refreshing physical sensation but a spiritual one as well.

How to Get There

The only way to get there is through an hour-long bus ride from Cajamarca .