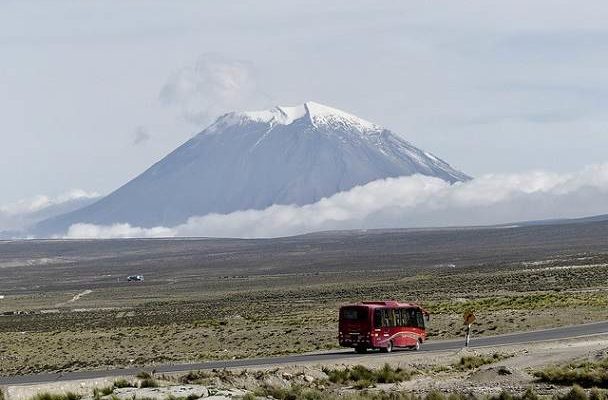 For most travellers the Southern City of Arequipa serves as a quick stop for a day or two or as a base for trekking in the spectacular Colca Canyon. I went back to Arequipa to take on a different challenge that had been in my mind since my previous visit a few months earlier. Looming over the city is the beautiful “El Misti” a volcano clocking in at 5,822 km. Although that sounds pretty steep, Arequipa is a high altitude city and I had been told it was a climb that even inexperienced climbers like myself could have a good crack at El Misti. On arrival I booked myself a guide to take me up for a two days and one night climb which cost $50. If you’re going solo, then you’ll have to wait to piggy back another group. Luckily I met Juan, a climber from Barcelona and we both become great friends with El Misti in mind. We had a day to kill in Areqiupa before our trip. This was no bad thing as Arequipa is a pretty good place to be at a loose end. It has a beautiful mix of old colonial buildings and Peruvian urban chaos sprawling out in all directions from the central Plaza. As I already knew the city fairly well, we stuck to the central Plaza de Armas, soaking up the local delights of pisco sours and filling our bellies with great Peruvian food. Arequipa has some outstanding local cuisine and I highly recommend the Rocata Rellono- though watch out for the spicy surprise inside.

The streets of Arequipa

The day of the climb Juan and I met our guide Alberto at 8 in the morning and loaded up a jeep with all the gear we needed. A friend of Alberto drove us to the base of El Misti which took about an hour from the centre of Arequipa. Once we got moving the walking was hot and heavy going, largely due to all the water we were carrying. However, the increasingly amazing views made it worth it. Below us a hazy Arequipa stretched out for mile after mile and on the opposite horizon was the sight of Chachani, another even more impressive volcano that made El Misti look feeble in comparison. By 5 oclock, Alberto had us at base camp and cooked up a well received dinner. He then informed us that we should set up camp and get our heads down for a few hours sleep as the rest of the climb will be completed at night starting at 1am. This was in order to get us back down to meet our pick up at noon the next day. Although not ideal, the alternative of missing our pick up the next day was far less appealing.

Alberto got us out of our tents at 12.30 after several hours of trying to sleep without success. The night climb was a killer. In the South of Peru the temperature plummets once the sun’s gone down and at that altitude the effect was amplified. It was absolutely freezing and climbing in the dark was a real test of our resilience. Running on nothing but bravado and cheap Peruvian chocolate, we reached the summit at dawn. Cold and exhausted, we witnessed one of the most welcome sunrises I’d ever seen. Dawn also revealed the treasures on top of El Misti, an active crater pumping out sulphur. I remember gazing on in wonder silently promising myself never to do anything that difficult again.

Soaking up the sun on top of El Misti

After a couple of hours on top, warming in the morning sun and exploring El Mistis craters we headed back down. To my delight, the real fun came in the descent. Due to the thick volcanic sand on El Misti it’s possible to jog down in a style verging on skiing. This meant that our descent was a few hours of really enjoyable ski -jogging in contrast to the previous night’s activities. We reached the bottom with smiles on our faces and my promise to myself long forgotten. If you fancy a rewarding challenge give El Misti a crack. Tough but more than worth the effort.