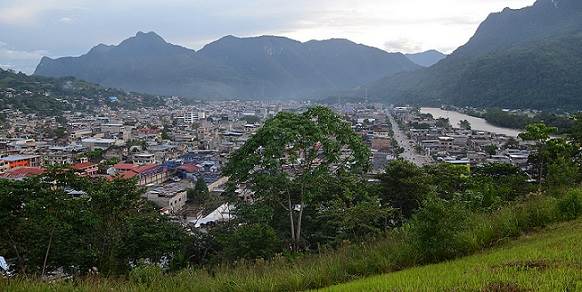 There is a beautiful city located within the jungle of Huánuco, the entrance to the Peruvian Amazon, and it’s also known as the “City of Sleeping Beauty,” because the mountain range that adjoins it resembles a woman reclining into a tranquil sleep.  It is located 120 kilometers (74.5 miles) north east of Huánuco city (which is part of the middle east Peruvian territory), the capital of the province of Leoncio Prado and founded in October of 1938. It’s climate is typically warm with tropical humidity and its temperature on average reaches 28 degrees Celsius ( 82 degrees Fahrenheit). There’s abundant rain during the months of January and March. Because of it’s geographical location, Tingo Maria has beautiful scenery and many unexplored places.

It has the Lima-Huanuco-Tingo Maria central road, its climate, dense vegetation, gorgeous natural scenery, waterfalls, caves, rivers, airports, hotels, beautiful craft works, restaurants, local food and delicacies, exotic drinks…all these things and more make this city a real tourist destination. And if that is not enough, it also has adventure tours, scientific or mystery/investigation tours for those looking for alternatives.

If we look out towards the horizon of this beautiful city, you’d be able to see the outline of a beautiful woman, reclining on her back and covered by a lush green cloak while she gazes up at the sky. There is a common legend that says that this woman was actually a princess named Nunash, and goes on to say that there was also a young man named Cuynac whom are now the figure of the Sleeping Beauty. “She,” is one of the most visited places, with a chain of clear-water waterfalls (with drops of approximately 50 meters or 164 feet), surrounded by mountain ranges covered with greenery. Throughout the whole path, visitors can also enjoy the various species of orchids. You’d get good views of plenty of wild animals too! The Waterfalls of Tambillo or The Veil of the Nymphs

Located just 25 minutes outside the city of Tingo Maria, near to the village of Tambillo Grande. Access to the area is by road (using a car, bike or motorcycle). Once there, you’d be taking a walk. Climbing and scaling over boulders, water (streams) and vegetation. An hour later, you’ll reach your first waterfall, the pretty Velo de las Ninfas (veil of the nymphs) with natural pools of water. Next, you’d reach the Waterfall of Love (cascada del amor). It’s a wonderful waterfall that falls into a natural pool that is surrounded by deposits of chalky rock formations. Once you continue your walk, you’ll come across the Cave of the Tambos. It’s a naturally formed cave with crystalline waters and in which beautifully colored parrots,  parakeets  and swallows have made their homes.

The Cave of Owls

It has walls of limestone and is adorned with great stalactites and stalagmites, that with the passing of time have formed in curious and varied shapes. The entrance is massive and reaches a height of more than 30 meters (98 feet). Those that see it, are invariably impressed by it. Inside of the cave, there are different openings with various galleries placed one behind the other in a straight line and some even possessing dome shaped ceilings. It is also known as the Monzon Grotto and many historic findings such as pre-Incan that this was probably some kind of temple where magic or religious rituals took place.