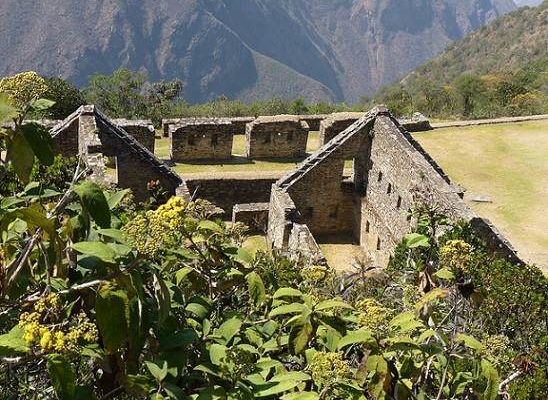 The traces of the Inca civilization are not limited to what has already been discovered. The forest keeps still many secrets as that of Choquequirao.

In the heart of the forest of Cusco , more than 3 thousand meters above sea level, protected under the foothills of the snow-covered Salcantay and settled in the natural beauty of the valley of the river Apurímac; Choquequirao raises itself proud in the province of La Convencion, in the department of Cusco.

It the middle of an area with overwhelming ecological diversity, Choquequirao is a complex of ruins that in a remote time was a fortress, center of commercial and religious activities in the hegemony of the Inca empire. Choquequirao was discovered, just like the fortress of Machu Picchu, by the American Hiram Bingham, but it wasn’t until well in the 20th century that it was given the importance that its nature required. In present time it has been disinterred approximately 30% of the totality of the complex. To give an idea of the importance and the reach of Choquequirao, it would suffice with saying that is a fortress with an architectural organization, a location and a very similar distribution we find in known ruins such as Machu Picchu .

It is known that Choquequirao was one of the bastions of the dynasty of Manco Inca, when the resistance against the Spanish invader withdrew all the royal panaca to the jungle of Vilcabamba, that culminated with the capture and execution of Túpac Amaru I  in the year 1572. Subsequently, its difficult access marginalized it of Spanish occupation and was not known again of until the registration of Hiram Bingham (except by mentions of explorers and Spanish columnists such as the Juan Arias Topete in 1710, Cosme Bueno in 1768 and Pablo José Origaín in 1790).

To date the restoration works are being concluded and made ready so that Choquequirao becomes a tourist destination as attractive as Machu Picchu.