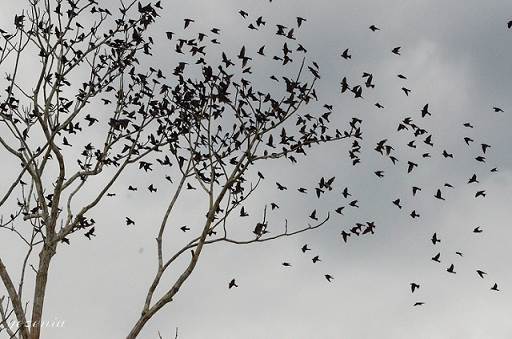 Peru’s ecosystem relies on the near-endless natural wonders for its diversity, leisure, and even biological studies. Among the country’s protected national parks, the biggest of all is the Reserva Nacional de Pacaya-Samiria located in the Loreto region within the heart of the Peruvian jungle.

The Sanctuary
Pacaya-Samiria is named after the rivers two rivers that unite within the sanctuary’s region. Together, with their placid waters that give way to swamps and marshes, they create a body of water that reflects the bluest of skies and the jungle’s array of greens. For this reason, the rivers give the land the title of “Tierra de los Ríos Espejos,” the Land of the River Mirrors.

Situated in a tropical region and with suitable humid temperatures, the national reserve is over five-million acres making it the second largest Amazonian territory and the fourth largest territory in all of South America.
The reserver also holds the tittle of having the largest biodiversity in the entire world with 58 amphibious species, 69 reptile species, 102 types of mammals, 256 types of marine life, and over 500 species of birds that are either migratory or endemic (local populations that do not migrate). As a result of this, bird watching is one of the most attractive tourist attractions of the sanctuary; and everyday, a travel agency rises to cater to the needs of bird watchers who wish to experience this never-before precedented experience.

The Tour
One of the many agencies that offers 3 day and 2 night excursions into the natural paradise with its still virgin jungles is Pacaya-Samiria Amazon Lodge.

Their bird watching package begins with tourists being transported from the airport and taken to the city of Iquitos, which is an hour away from Lima by plane.

Then, guests will be transported to Nauta the first city established in the Peruvian jungle by the Spanish. Here, the agencies lodges are found and accommodate tourists during their stay.

After settling in, breakfast will be served; and after resting, tourists will be taken to the beautiful wild and into the homes of the exotic Amazonian avians. Some of the most sought birds are the Cotinga with its plum-like throat, the Guacamayo, and the short-tailed parrot.

On the second say, a hike will take bird seekers into the jungle to see the colorful black neck Trogon and the different species of black crescent and white flank Hormigueras.

Continuing on the hike and deeper into the jungles that surround the Yanayacu River, even more exotic birds begin to appear like dark-neck falcons, the red Continga, mosquito hunters, and the yellow billed Jacamar.

Finally, on the third day, guests will visit a riverside community of Iquitos so guests can get to know the locals, their art, and understand their culture. Most of the hand-crafted goods are made from tagua, a type of processed palm tree. Afterwards, the agency will take tourists back to Iquitos for the flight back to Lima.

Recommendations
It’s highly recommended that Pacaya-Samiria national sanctuary be visited between the months of May and October. The rest of the year, the sanctuary is subject to heavy rainfall typical in tropic regions. Don’t forget sunshades and hats, sunblock, mosquito repellant, and really light clothes. True bird watchers should not forget to bring and use their binoculars and cameras.