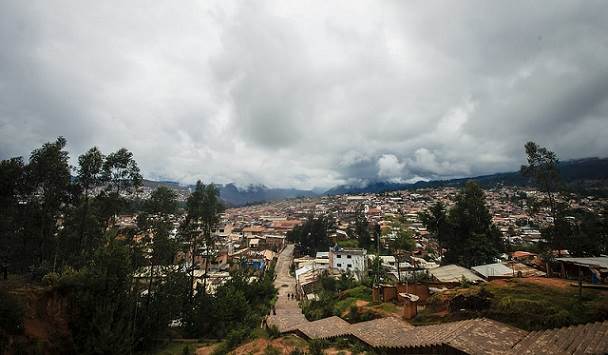 Chachapoyas, located in the Peruvian northwest, capital of the Amazon department, whose name stems from the native word “chachapoyacuno” which means “forest or mountain of fog” being recognized by the presence of orchids.  Known as one of the most interesting civilizations that fought against the Inca expansion in the period of the conquest by the Spaniards.

Inside the urban area, Chachapoyas conserves its extensive large houses with ceilings of tiles, large patios, surrounded by orchards and gardens, and original balconies that reveal the Spanish presence.  Its architecture whose style has marked differences with that of the Inca includes geometric designs, cornices and other friezes.  This city is the starting point to arrive at the locality of Tingo, in the province of Luya, place where Kuelap is found, built on the top of a mountain.

The fortress of Kuelap located to 35 km (4 hours by land) to the south of Chachapoyas, to a height of 3000 msnm, in a zone where the Andes culminate and the forest is initiated.  In it you will be able to witness fortresses and places that still are in full investigation, many even are still covered by the thick vegetation and in difficult zones to enter.  Therefore we recommend TurismoExplorer, where they offer a safe tourist guide toward this location. How to get to Chachapoyas?

You can arrive by air, by land or a combination of airplane and highway.

The trip by land from Lima to Chachapoyas lasts close to 30 hours.  It is recommended to arrive for air to Chiclayo, capital of the department of Lambayeque, or to Tarapoto, in the department of San Martin, and you can do this from Lima through Lan.  Later you can continue the trip through highway.

Inside the most popular sports activities in Chachapoyas is the Light trekking, that consists of a walk combined with hicking on rural land.  You will be able to appreciate in this way the combination of the mountains with the beginning of the forest.

The gastronomy is various and succulent The typical dish of the city is called Puturmute, and is a mixture of beans, salted meat, cilantro with corn.  Also emphasized is the Boto, a banquet consisting of delightful figures prepared with condimented poultry, which are presented in a great table accompanied by bread, guinea pigs, pumpkins, yuccas, cane of sugar and liquors such as firewater and sugar cane liquor.  Other typical dishes are the shirumbe, purtumute, shipasmute, spice of guinea pig, guinea pig with peanut and potatoes, juanes of yucca, salty animal meat and hog, tamales, humitas and stew.

To drink we have the liquor of jora, liquor of leg, guarapo,sugar cane liquor, chuchuhuasi, liquor of milk, mistela and abejadito.

Inside the most welcoming lodgings we find:

For those that decide to explore Chachapoyas, we include the following hotels:

In case there is an emergency during your trip, Chachapoyas has the Hospital Regional Virgen de Fatima located in Pj.  Daniel Alcides Carrion 035.  Telephone:  777016.

Important:  Although we have never heard of people that contracted yellow fever in Peru or in the neighboring countries.  It is recommended to be vaccinated against the yellow fever for the ones that visit any of shelters in the forest.  Consult with your doctor.  This vaccination, that is valid for 10 years, should be administered AT LEAST 10 days before the arrival to Peru.