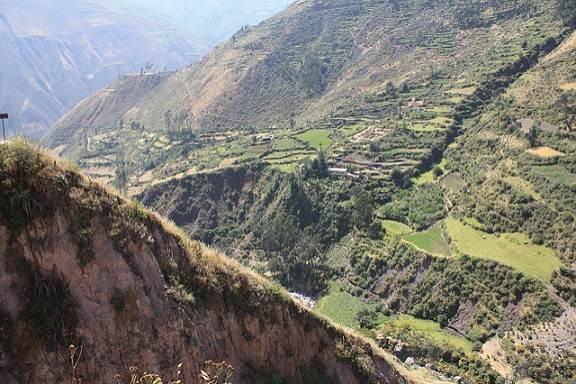 It is true that Lima is a noisy and polluted city, however, nearby, at 74 km to be exact, there is an impressive place that should be included in any relaxing visit.  The Antankallo cataracts are found in the Rimac valley, department of Lima, Huarochiri province, Matucana  district.

In order to enjoy the impressive landscapes offered by this paradisiacal place, one has to reach  Matucana, capital of the province of Huarochiri . Parting from there and after walking for 2 hours, one reaches the exuberant waterfall.  During the journey to the falls one can enjoy incredible landscapes, practice ecotourism , cross bridges, observe rock formations like the Christ and, furthermore, be enjoying the splendor of the falls as one nears it. Within the attractions of Antankallo one finds:

Arca Lagoon: Located at 4650 m.s.n.m. (meters above sea level) is the beginning of the enchanted lagoon.

Enchanted Lagoon: at 3500 m.s.n.m., this lagoon was created by the population in order to irrigate the fields.  Upon it one can appreciate flying condors and, in good climes, one can appreciate the snow capped mountain peaks of Ticlio, the highest point in Peru.  As the story goes, two groups of people agreed to create two irrigation ditches in order to irrigate the fields, however, arguments began that prevented its being carried out.  Each group started to create an irrigation ditch on its own.  When finished, they decided to once again get together  in order to reach an agreement.  In the middle of the discussion a mysterious, gleaming man appeared on horseback who tells them that they should not argue since neither one will be able to achieve what is planned without him.  He asked for the prettiest maid in the town in exchange for creating the lagoon and the population agreed and complied with the promise.  According to the story, on nights of the full moon, one can see a woman brushing her hair by the shores of the lagoon, but it is best not to stay there since many ended up at the bottom of the lagoon trying to follow the beautiful woman.

If you don’t have much time and cannot ask for a vacation, think about this destination near Lima which will only require a weekend to visit  and you will, furthermore, be able to leave behind the stress and worry that Lima offers day to day.