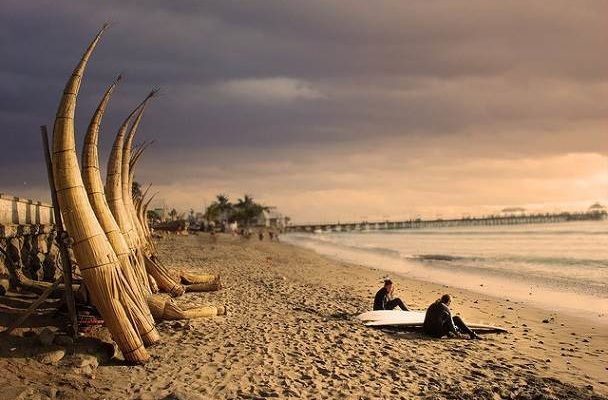 Peru receives international acclaim for its man-made mysteries – primarily Machu Picchu and the Nazca Lines – but perhaps one of its equally alluring destinations wasn’t manufactured by hand.

Peru’s beaches stretch more than 1,400 miles (2,250 km) down a sprawling coastline that kisses the Pacific Ocean. At nearly double the length of California’s famous seaside, Peru offers travelers a varied experience – from luxurious resorts to surfing Meccas to playful penguins.

With the curtain of Peru’s longer, warmer, sun-kissed days slowly closing as summer prepares to take its final bow, now may just be the perfect time to plan a retreat to the beach.

1. Máncora – Called the “Hawaii of Peru” is the northern city of Máncora, one of Peru’s most popular beaches. Consistently warm weather and clear skies mean vacationers flock here year-round. The resorts in this town are luxurious, as are their pools (for those who want the water without the salt).

3. Lima – Lima is more than a layover city and its beaches are proof of that. While the beachfront along the Miraflores, Barranco and Chorrillos neighborhoods can get a bad rap for being too crowded, they do offer easy and quick access to the ocean. A dozen or so surf schools line the coast, as do paragliding companies which offer a birds-eye-view of the Costa Verde.

4. Paracas – The most wildlife typical beach hoppers see are the schools of fish in shallow waters and the birds begging for food. But in Paracas and the neighboring Ballesta Islands, which are called “Peru’s Galápagos,” visitors spot sea lions, fur seals, Humbodlt penguins, dolphins and the blue-footed booby.

5. Huanchaco – With waves reaching three-feet-high, surfers flock here to work on their technique. It’s also where surfers from around the world met last week to compete in the 2014 Huanchaco Longboard Pro Peru tournament. While the waves can be intimidating, there are dozens of surf schools, some with former professional surfers as instructors, just waiting to teach longboard virgins how to brave the waves.