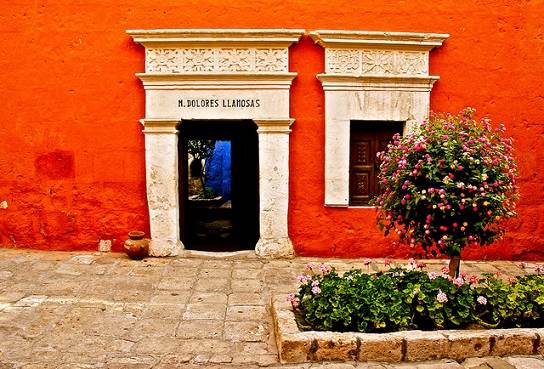 Arequipa is the second most important city in Peru with regard to economic and political development, called “the white city” for the ashlar used in the construction and architecture of its buildings. As a tourist destination, Arequipa offers great natural (Del Colca Valley, El Misti, Canyon of Cotahuasi, etc.), cultural (Monastery of Santa Catalina), and archeological attractions.

The city of Arequipa (capital) is located 1003 km from Lima by way of the Southern Panamerican Highway (14 hours by bus: Peru bus, Ormeño, Cruz del Sur all arrive directly at the Arequipa terminus).

We arrive in Arequipa, located on the side of the dormant but vigilant volcano Misti. We can begin with the city tour at the Plaza de Armas de Arequipa, surrounded by the Cathedral and several portals, the Portal of Cabildo (Portal of the Municipality), the Portal of Delights (Portal of San Agustín), and the Portal of Joy (Portal of Flowers).

The Cathedral of the city of Arequipa was one of the first religious monuments of the seventeenth century, and another prominent religious building is the “Church and Complex of the Company of Jesus”, buildings erected by the jesuits for religious purposes such as housing. We can also visit the Complex and Church of San Francisco, the Monastery of Santa Catalina, the Convent of the Recoleta, the Church and Convent of Santo Domingo, the Casa del Moral, the Neighborhood of San Lázaro, Casa Goyeneche, the San Agustín Church and the La Merced Church, all within the perimeter of the Plaza de Armas. Outskirts of the city

Emphasized among the most representative species of the reservation are the viscacha, the fox, the condor, and the andean/parihuana flamingo.