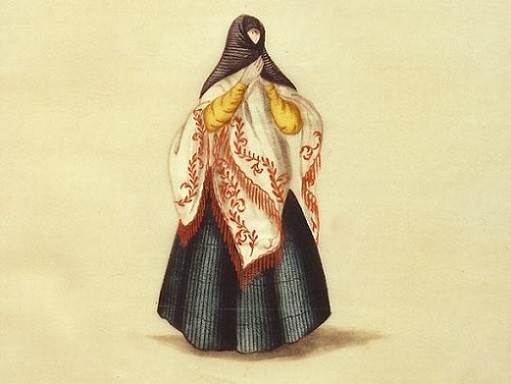 There are several figures who are associated with colonial Lima, owing to its architectural, cultural, and social features. When we think about Lima, we recall the great boulevards, the exquisite constructions, her carvings in high relief and the sensuality of the Covered Woman of LimaÑ the prototype of beauty for the Peruvian woman.

The cloak and the smock, distinctive garments of the Covered Woman of Lima, appeared in the city around 1560. It is suspected that they are of Moorish origin, since they resemble the full-body garments of Muslim women. However, the Catholic community rejected this idea as an “offense to God”.

This type of clothing would emanate insinuation, flirtation, sensuality, and prohibition. The smock outlines the hips and delineates the bodies of young Liman women, while the cloak would cover the head and would leave only a single eye visible. Beneath the cloak could hide a beautiful woman, an elderly lady, a young girl, or a woman infected with smallpox. This mystery led the young men of Lima to squander their galant verses on the veiled women, because they didn’t know if they corresponded to the individual beneath the garments. A prohibition and a curiosity

Tradition holds it that San Toribio of Mogrovejo, archbishop of Lima during colonial times, promulgated a decree in 1583 in which the custom of the women of Lima to wear a cloak over the face, then considered normal, was to be henceforth prohibited. This prohibition was confirmed by King Felipe II and it was declared that whomever was found guilty must pay a fine of 3 thousand maravedies.

What was the reason for this prohibition? If we read the previous phrases carefully, we will see that whomever was “found guilty” would pay a fine which in those days was not possible for anyone to pay. That is to say, the fact that the cloak covers the woman’s face in its entirety could faciliate the propagation of homosexuality and transvestism, which was considered a sin worthy of the Inquisition, at least according to the priests.