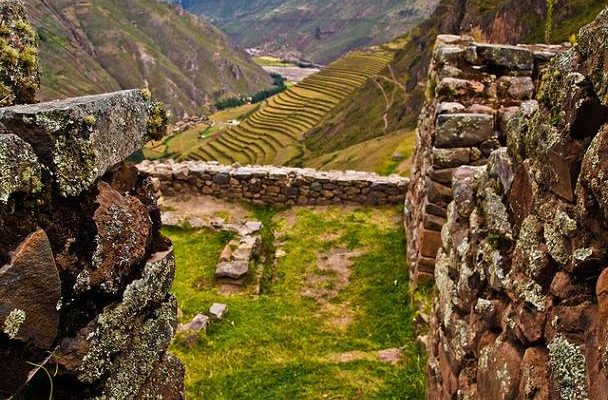 The Sacred Valley is the name given to three villages in a low-lying valley, traversed by a single river. The Inkas believed that the river was sacred because it runs a course of East to West, same as the trajectory of the Sun, their highest and most significant deity, therefore bestowing it with symbolic meaning. Seeing as we only had a day to spare, Bram and I decided to visit the two most important villages and their respective Inka ruins at Ollantaytambo and Pisac.

In the morning we visited the ruins at Ollantaytambo, and while there are two different sites on each side of the village, we weren’t aware that the most popular ruins were located on the opposite side. We began a once again steep ascent towards these not so well-preserved ruins, and after a certain point we broke off in different directions. On the way up, I met a Peruvian archeologist named Rudy, who provided me with information on what it was that we were seeing. He pointed out the fact that the village of Ollantaytambo is shaped in the form of a corn stalk, and that the original structure of the Inka village perched on the hill across us was designed in the shape of a llama. Ruby even performed an Inkan sacred ceremony, whereby he stood at a ceremonial site and blew on a giant conch. About an hour later I met Bram further down and made our way towards the second archeological site. Looking at the remnants of what had once been a temple that rose up to a possible 30m in height, the guide we’d hired for an hour briefly explained how the ruins had been built by a man called Ollanto. According to the legend, Ollanto was a simple villager who had fallen in love with an Inkan princess called Tambo. Ollanto built this city and an army in his attempt to conquer over Tambo’s father who had refused him the hand of his daughter. However, what was truly remarkable about standing by the ruins was the images on the two mountains (abus) across it. On the side of the mountain opposite the village, the profile of the face of an Inkan prince and his crown can be observed, carved there hundreds of years ago by residents of Ollantaytambo. What was even more astonishing was noticing that the second mountain, which was located at an even greater distance, was adorned with the carved form of a dead and defeated king, lying on his back with his hands across his chest. The second figure had somehow been carved by the Inkas along the entire length of the distant mountain top.

In the afternoon we took the bus to Pisac, where a third archeological site was located. This had once been an agricultural village where the ruins of the original terracing, stone hamlets and temple of the sun can still be visited today. Having arrived at five in the afternoon we were unfortunately faced with the problem of being pressed for time which meant that nightfall would force us to cut our visit to the ruins short. By the time we were done with walking around the site it was completely dark and our anxious taxi driver was waving his flashlight in the air in an attempt to help guide us back to the taxi. Eventually, we found him standing by the street and waiting patiently, and having arrived just in the nick of time, as I’d just run out of battery in my flashlight! While I was happy we’d found our way back to the taxi before it had been too late, Bram stated that he would have been just as happy camping out at the archeological site for a night.

After several inquires with locals we find our way to the bus station to Pisac. Before we even buy our tickets, we put our big backpacks on top of the bus. We stand in line for the bus ticket but then the bus driver say get on. I’m totally confused now; but I don’t have a ticket? But Mike says always follow your bag…And I guess he’s right. So we get on and sit down a few moments later we are told that we’re sitting in someone’s seat. Ohh this is bad, I don’t have a ticket with an assigned seat number. So we will be required to stand the 1 hour bus ride to Pisac. But you pay the full sit down price? It doesn’t seem fair but whatever it’s only $2 for the hours bus ride. So there’s a system in Peru. First you buy a ticket, then you get on the bus sometimes in a assigned seat others not. Then someone comes and sees if you have a paid ticket, no? Ok, we’ll sell you one. Then a little bit later they come around again, tickets? Ok you have a valid ticket tears it or marks it whatever. Sometimes this is done by the same person sometime by multiple people. Like on the bus ride from Pisco to Lima our tickets were checked at least 10 times.

On Sundays, Pisac has a huge market where the tourist buy souvenirs and the locals buy their weekly supplies. I bought a small chess set that had the Incas vs Spaniards. I thought it was very unique, though they are everywhere in Peru. We also saw live guinea pig; that I assume you could pick out and get cooked sort of like lobsters in the USA.

On Monday morning, we took a taxi to the top of Pisac to view the ruins. At the ruins I saw for the first time Inca engineering. It was amazing how they had these water ways that would bring water from the mountain springs then divide up to separate sinks for their water use. But then I walk a little uphill and saw the true source of their water, a hose. I’m sure that 500 years ago they did not have a pipe running down the mountain but it was just funny to see. From the top, it´s about a 60 minute walk down hill to Pisac along a narrow footpath. After a quick mid morning omelet it was off to Ollantaytambo which had some more Inca ruins.

To get to Ollantaytambo we took a bus to Urubamba, then were told to get on the next bus to Ollantaytambo. While at the bus station, we were asked if we wanted to take a taxi for 2 soles each. Good deal since the bus would have been 2 soles also. So we say yes. We walk over to the taxi and there’s someone already in the taxi. Ah that’s why it’s cheap. We get in and wait, after a few minutes, the taxi driver comes over and says that if we want to leave right now it would be 10 soles (5 each). If not, we would have to wait until the next bus came and they got another passenger. Well the taxis in Peru are not that big and we didn’t know when the next bus would arrive so we agreed that it would be best to go ahead and pay the extra $1 each. The Ollantaytambo ruins are a lot bigger than the ruins in Pisac. They really appear to be carved out of the mountain. We then went Cusco in the $10 -1 hour 20 minute taxi ride; amazing, try getting that in NYC. But the real story is I saw him drop off someone in Ollantaytambo for 150 soles, so we were just paying for a return trip that he would have had to do alone. However, about 20 minutes outside of Cusco we stop and offer a ride to a cop on his way to work. The taxi driver asks if it’s ok; like we’re going to say no?