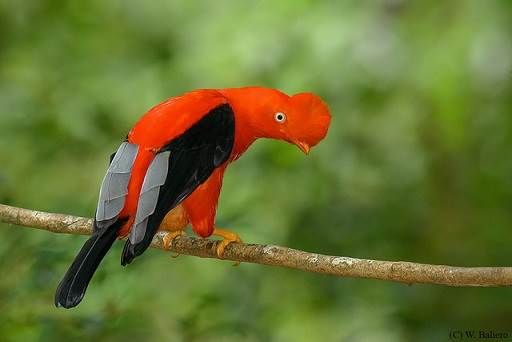 For the fans of birdwatching , a journey to the Peruvian forest is very important to be able to give free rein to their ecological inclinations and to see how the birds unfold in their natural environment.  By their gaudy colors and the way they devise their croaks, the Peruvian birds are very prized among the experts of this subject.

One of the birds that are more sought in the Peruvian forest is the Rooster of the Rocks, the national bird of Peru .  It is described as a small ball of fire that crosses the greenish forest, due to the intensity of the red color of its plumage and to the small crest on its peak.  As opposed to its partner, the female goes unnoticed by its reddish brown plumage.  It is considered by the specialists as a typical case of “sexual diformity ]“, term that describes the difference of appearance that exists among the types of species.

The Rooster of the Rocks is the size of a small chicken and it feeds from a great variety of wild fruits, that grow abundantly in the forest of the oriental side of the Andes .  Due to this a large quantity of food exists in this region, the male one satisfies its alimentary needs very quickly, dedicating the remainder of its day to a complex social contest to attract the females inside a flock.

To attract them, the Rooster of the Rocks will dance on a branch and will seek to be differentiated from the remainder by their song.  Once it obtains its partner, the female will be entrusted alone with the incubation and care of the pigeons The self-sufficiency of the females

The females of the Rooster of the Rocks are characterized for not needing the male one to comply with the work of the preservation of the species.  This itself is due to the  fact that nature is wise and it has differentiated them notably from the male.  By their gaudy colors, to be near the nest would attract the attention of their predators, such as the eagles and the snakes.

In view of this, their dark reddish brown plumage is confused with the trees where they nest and only seek the male when they desire to reproduce.  Consequently, the unique thing that the male can offer to the females is their ability as dancers and singers.

Nevertheless, this does not occur in any other place.  The scientists have determined that the Rooster of the Rocks only performs its mating ritual in determined areas of the forest, called leks.  In this place, the female will observe them thoroughly and will evaluate its artistic gifts.  Besides, it will choose the Rooster that returns promptly to the dancing session, since this indicates that it can avoid predators easily and survive one more dayin the forest.

Those that gather these two conditions will be elected to pass its genes to the following generation of Rooster of the Rocks.