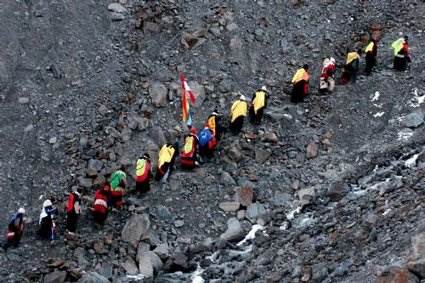 The pilgrimage to the Sanctuary of the Sir of Qoyllur Rit’i is a traditional festivity of the zone of Ocongate in Cuzco.  This convenes many groups of people from the Andean zones of Peru and Bolivia who walk during several days until they arrive at the foot of the snow-covered Qoyllur Rit’i, where the above mentioned sanctuary is found.

The traditional festival is carried out during May or beginning of June created officially in 1780.  It tells the history of Mariano Mayta, a small shepherd who finds in the heights a boy of clear complexion call Manuel (in the Peruvian mountains, Jesus is known as the boy Manuelito).  They become friends in little time and they share work, games and food. When Mariano returns to his home, he discovers that his flock had grown bigger. As a prize, his father gives him money to buy new clothes in Cuzco. Mariano thinks about Manuel and decides to buy him a change of clothes similar to the one he wore and asks him for a piece of it to use as a sample. Once in Cuzco, they tell Mariano that the cut piece was “fabric of bishop” and a delegation departs with him to verify who the special garment belonged to.

The delegation arrives at the location along with Mariano and they find Manuel shining with his own light, and when they touch he becomes a tree of tayanka in the form of a crucifix. Mariano falls dead in that instant and his body is buried in that same place. From that moment, once a year that pilgrimage to the sanctuary is carried out.

The festivity of Qoyllur Rit’i is a very colorful and picturesque tourist attraction. You can enjoy foods such as the potato pachamancas or “watts” and enjoy traditional dances and costumes as the ukukus and Collas. The festival has prehistoric origins but these were combined with Catholic tradition and today is one of the most important religious festivals in the Andean region it has reached to convene an average of 10 000 people a year.