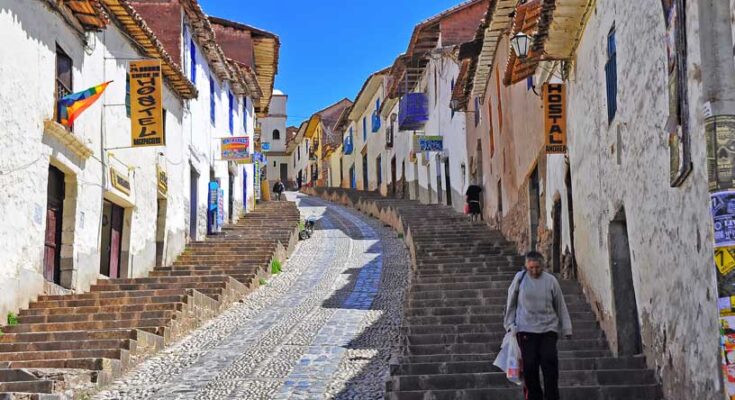 Strolling the streets of Cusco is quite an experience; strenuous but full of magic and charm. The city of Cusco in Peru is built 3.430m high, surrounded by green mountains and colorful inhabitants who still walk with their llamas and donkeys up winding staircases passing magnificent constructions indicative of what the ancient Incan empire used to be like.

Maybe the best way to understand the fusion between the Andean civilization and the influences of the culture and architecture of conquering Spain is by observing Cusco’s street names.
Among the Cuzco street names, we find a series that allude to the mysterious meaning of the number seven, which for the Quechua speaking population refers to the seven metaphysic entities including the sun, moon and earth. The number is usually accompanied by mythological representations of deities such as ‘Siete Angelitos’ (angels), ‘Siete Diablitos’ (devils), ‘Siete Serpientes’ (snakes – one of the 3 Incan sacred animals) as well as architectural shapes in ‘Siete Ventanas’ (windows), ‘Siete Cuartones’ (squares or scantlings) or animals that used to roam the streets: ‘Siete Borreguitos’ (lambs).

Other denominations have their origin in trades that were carried out on that particular spot: ‘Heladeros’ (ice-cream sellers), ‘Encomenderos’ (Spanish local ruler in charge of producing goods on land given to them, using the indigenous slaves) and ‘Plateros’ (silversmiths). The characteristic arches that line the beautiful Plaza de Armas are also associated with activities such as ‘Portal Comercio’ (trade), ‘Portal de Harinas’ (flour), ‘Portal de Panes’ (bread).  The very popular street known as Gringo Alley or ‘Calle Procuradores’is called that way be because prosecutors of the royal house were staying there in times of the Spanish rule, while a parallel street used to be known as ‘Calle Sucia’ (dirty) as all horses and other animals were stationed there whilst people had business in the centre of Cusco. This street is now one of the most picturesque streets running off the main square, and has also been the main site for AMAUTA Spanish School ever since 1996. An extra letter has been added to the old street name to change the meaning altogether, now being called Calle Suecia (Sweden).

Other street names are in the indigenous language Quechua and can be extremely difficult to remember for a newcomer to town: Choquechaka, Suntur Wasi, Puma Kunku. The latter’s meaning can be traced to the Inca period when, incredibly, you could see pumas tied up to tree trunks to create panic. Also the long and dark streets ‘Ataúd’ (coffin) and ‘Purgatorio’ (purgatory) speak obscurely enough of the importance conceded to death within the Andean culture.

Finally, there are some streets that reveal the intensity of Andean life itself: ‘Desamparados’ (forsaken), ‘Afligidos’ (suffering), ‘Amargura’ (bitterness), although the last one also might have something to do with the 100+ steps you need to climb to walk that particular street!