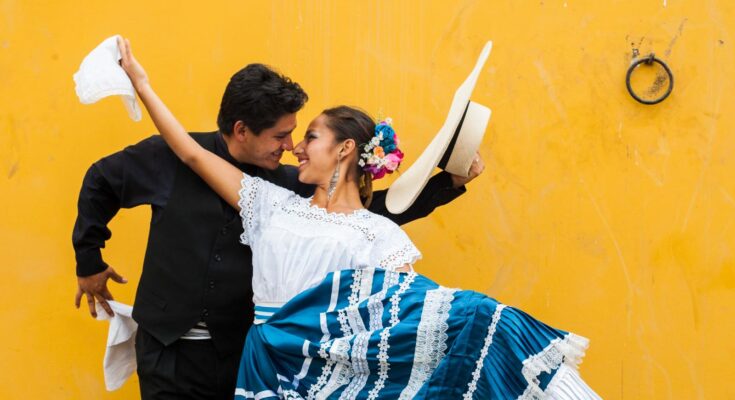 Marinera is a coastal dance of Peru and it is a graceful and romantic couple’s dance that uses handkerchiefs with the dancers´ hands. The dance is an elegant and stylized reenactment of a courtship and it shows a blend of the different cultures of Peru. The Music starts and they watch one to the other to the eyes, through the distance that measures the assumed challenge. She, the always secure female, always provocative, always first, raises her handkerchief and she waves it with grace smiling to the love and to the life and shining in its brief and slowed down stroll, showing all the enchantment that the man wishes to conquer. From a distant spot he greets her with his hat in hand and he announces to her, with his elegant and decided steps, that he does not hear any escape of refusal, and that as a great connoisseur of the game, he dies of impatience to win… The dance itself has gained a lot of Recognition and is one of the most popular traditional dances of Peru.

Ever since the 1960s, during the month of January, in the city of Trujillo a National Contest of Marinera is held. The exact Origin of the dance is unknown, but it is an unmistakable blend of Spanish, Moorish, Andean and Gypsy rhythm influences. It is rooted in the Zamacueca, Canto de Jarana of Lima, and the Tondero of Piura.

The most widespread version of its origin relates with the Zamacueca which arose in Peru as a variation of Spanish Fandango dancing with Criollo and African influences. At the moment three Types of Marinera can be distinguished. They are all national dances which constitute the maximum expression of the Peruvian feeling called “Criollismo”. Marinera LimeÃ±a, cheerful and vivacious, finishes generally with a “resbaloza and fuga (slippery and escape) “, of faster movement. Marinera Costeña, (North and South Coastal zones of Peru) is played with a movement more alive than the LimeÃ±an and it is always played twice, from which came the saying “No hay primera sin segunda – There is not first without second”. Marinera Serrana, Highland/Mountain) generally with slower movement, it also repeats itself, adding to it the “fuga de wayno”. Although the Marinera Serrana, logically has Indian influence, in the Marineras CosteÃ±as and LimeÃ±a we can find some characteristics of the Spanish influence, but what makes them so different is also the African-Peruvian influence. To the gracefulness of its music, it is added the “make fun” type of lyrics, along with the provocative music and rhythm accompanied by the “cajon” (wooden box). The African-Peruvian influence is noticeable also in the choreography of the dance, in which the man always follows the woman, and the woman provokes and makes herself hard to reach. The Musical accompaniment is traditionally made of a group of 4 guitars and “cajon”. It is also the custom that 2 of the guitar players are the singers. It is also typical to add the claps of the singers and the audience. The name of “Marinera” started as a patriotic symbolism in 1879, it was in this year when don Abelardo Gamarra, “El Tunante” (The Rascal), baptized this dance as Marinera, in tribute to the Peruvian Navy.