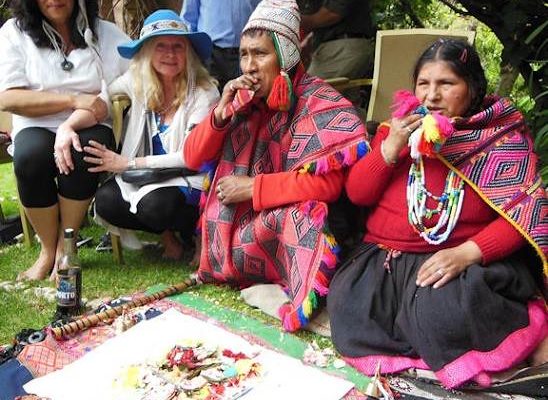 Shamanism goes back thousands of years in Peru. Shamans serve as mediators between the spiritual and material worlds. They use their abilities to predict the future, heal physical or emotional illnesses, interpret dreams, seek good fortune, or avert bad luck.

Objects used in offerings are particular to each shaman. Shamans usually collect these objects over their lifetime. The objects have both a personal and cultural meaning. They often combine both Christian symbols and Peruvian symbols, such as the coca leaf, food, and nature.

Coca, in particular, has deep spiritual significance—it is thought to bring men and women into harmony and promote solidarity with the self, others, and the natural spiritual world. So, shamans commonly use it in offerings.

Stones also have special significance. The elements have uniquely shaped stones, so shamans believe stones have accrued power through their experiences and relationships. Stones work to gather wisdom, strength, and action towards the goal of the ceremony.

In Peruvian shamanism, each object is not directly tied to a specific meaning. Rather each object is a kind of touchstone to the spiritual side of reality. In fact, the meaning of objects can even change over time.

Shamanic ceremonies may take place inside or outside. Sometimes the ceremonies are done at special locations. Other times they are done at the client’s house.

Shamanic offerings also differ based on local customs. Some may involve hallucinogenic plants such as ayahuasca (an ancient recipe of plant liquids) or the San Pedro cactus. In these rituals, the person who wants to be healed drinks the hallucinogenic substance. The shaman then guides him or her through a spiritual journey that may include visions and vomiting of bad spirits, energies, or burdens.